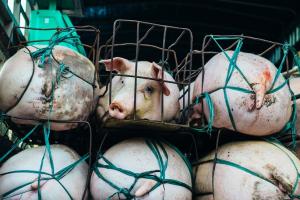 San Francisco is setting an example to the rest of the state and country that the time is now to take action against factory farm expansion.”
— noted Brandon Burr, Director of Food Policy for Animal Wellness Action

SAN FRANCISCO , CALIFORNIA, UNITED STATES, November 18, 2021 /EINPresswire.com/ — The San Francisco Board of Supervisors unanimously passed a resolution that supports a moratorium on the construction and expansion of animal feeding operations, factory farms, and slaughterhouses in the state of California. The resolution also encourages the federal government to support the Farm System Reform Act, reintroduced earlier this year in the United States Senate by U.S. Senator Cory Booker (D-NJ). The companion legislation was reintroduced in the House of Representatives by Rep. Ro Khanna (D-CA).

“San Francisco is setting an example to the rest of the state and country that the time is now to take action against factory farm expansion,” noted Brandon Burr, Director of Food Policy for Animal Wellness Action and the Center for a Humane Economy. “The animals raised for food at these concentrated animal feeding operations endure immense suffering and cruelty. And from an environmental standpoint, our planet cannot sustain perpetual expansion.”

Animal Wellness Action’s (AWA) endorsement of the Farm System Reform Act is just one facet of its broader factory farm campaign. Earlier this year, AWA was instrumental in the introduction of the Opportunities for Fairness in Farming (OFF) Act, led by Reps. Dina Titus, D-Nev., and Nancy Mace, R-S.C. in the U.S. House, and Sens. Mike Lee, R-Utah, Cory Booker, D-N.J., Rand Paul, R-Ky., Elizabeth Warren, D-Mass., and Kirsten Gillibrand, D-N.Y. in the U.S. Senate. The measure would better protect and support America’s smaller family farmers from the corruption within the U.S. Dept. of Agriculture’s Commodity Checkoff Programs such as the National Cattlemen’s Beef Association (NCBA), and National Pork Producers Council (NPPC).