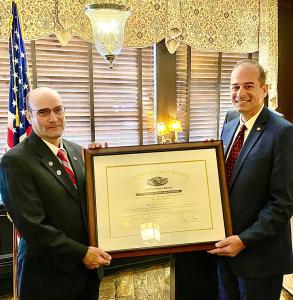 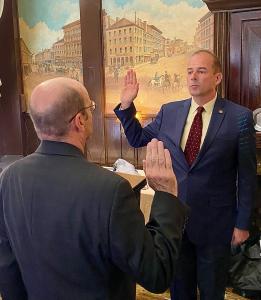 I am honored to serve as the Massachusetts State Director and look forward to working with our elected officials, education departments, veterans and civic groups to raise registration awareness.”
— Thomas Cronin

Cronin will serve as the liaison between the Selective Service System (SSS) and the Governor’s office. He will represent the SSS Director concerning agency matters in Massachusetts. “We’re extremely pleased that Governor Baker nominated Thomas to serve as the Massachusetts State Director and look forward to working together,” Brown said. “It is extremely important to keep Massachusetts men ages 18 through 25 up to date and informed about the registration requirement,” Brown noted.

“I am truly honored to serve as the Massachusetts State Director, and I look forward to working with our elected officials, education departments, and veterans and civic groups to ensure all of Massachusetts’ eligible males are fully aware of the Federal registration requirement and are afforded the opportunity to receive selected educational loans and grants and remain eligible for Federal and other employment opportunities,” Cronin said.

His service in the Air Force spanned 21 years as an acquisition professional, including tours at the U.S. mission to NATO, Electronic System Center, Pentagon, and Aeronautical Systems Center. Upon retirement from the military, Cronin served for more than 20 years as an acquisition support expert at many levels for Air Force and DoD-related projects, spanning NATO, Japan Air Self-Defense Forces, and U.S. intelligence, C3I and advanced concept technologies.

Cronin is a 1979 graduate of Norwich University in Vermont and was awarded master’s degrees in National Resources Strategy, Industrial College of the Armed Forces, Washington D.C., and Management and Supervision, Central Michigan University, Mt. Pleasant, Michigan. He has associations with the American Legion Post 223 in Duxbury, MA; the Software Engineering Institute; Carnegie Mellon in Pittsburgh, PA; and the Armed Forces Communications and Electronics Association.

Cronin makes his home in Duxbury, MA, and is married to Sharon Cronin, a former Major in the U.S. Air Force Reserve and Air Force Academy graduate, Class of 1982. They have two daughters, Jacquie of Madison, WI, Kelly of East Boston, MA, and one son Mike of Austin, TX.

All male citizens, as well as male non-citizens residing in the U.S., are required to register with Selective Service within 30 days of their 18th birthday. At 26, a man becomes ineligible to register and will jeopardize access to numerous federally funded benefits, job training programs, all government and postal employment, and many municipal jobs. Interested persons wishing to serve on Selective Service boards or needing more information about the SSS should contact the Public and Intergovernmental Affairs office at (703) 605-4103 or email PublicAffairs@sss.gov.