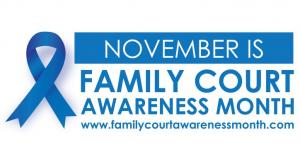 Elected officials stand with advocacy groups on the importance of child safety in the family court system.

“When the family court system fails to protect our most vulnerable members of society, it fails all of us.””
— Tina Swithin

SAN LUIS OBISPO, CALIFORNIA , UNITED STATES OF AMERICA , November 1, 2021 /EINPresswire.com/ — Advocacy organizations, Custody Peace and One Mom’s Battle have declared the month of November as Family Court Awareness Month. In its second year, the movement has gained tremendous momentum and has received support from elected officials across the United States. The movement has also received support from other advocacy groups such as California Protective Parents Association, Center for Judicial Excellence, National Family Violence Law Center at GW, Movement of Mothers, and The Court Said USA. There are plans for international expansion in upcoming years.

Family Court Awareness Month is an opportunity for survivors of domestic violence or post separation abuse to amplify their voices while raising awareness in their own communities on the undeniable shortcomings of the family court system. With events being planned around the country, the objective for the 2021 efforts will be focused on starting conversations between survivors and elected officials with the ultimate goal of finding solutions and making changes.

The month of November was purposefully chosen, as it dovetails October’s Domestic Violence Awareness Month. Domestic violence is about power and control and when an abusive relationship ends and children are involved, the abuse often escalates and transitions into the family court system. When the power and control dynamics become rooted in the family court system, children are often used as pawns and weaponized by the abusive, unhealthy parent. Education and training on domestic violence, post separation abuse and trauma is urgently needed for judicial officers and family court professionals to truly act in the best interest of children.

Over the past year, there has been increased media attention and awareness on domestic violence, coercive control and the family court system. The chilling police footage of Gabby Petito (and her subsequent murder) provided the world with a front-row seat to the intricacies of domestic violence. The recent success of Netflix’s, “MAID,” and Jane Doe Films, “Allen v. Farrow,” showcases the harsh reality that survivors of domestic violence are forced to navigate after making the brave decision to leave a toxic or abusive relationship.

Tina Swithin, creator of Family Court Awareness Month shared, “In our inaugural year, our efforts involved a cross-county tour from Los Angeles, California to Raleigh, North Carolina with stops in seven major cities to meet with media, elected officials, domestic violence advocates, family court professionals, and survivors of post separation abuse and domestic violence. Those we met with found it unsettling to hear about the realities of the family court system, an unregulated industry that is perpetuating and giving life to cycles of abuse for future generations to come. A conservative estimate is that 58,000 children are ordered into unsupervised contact with physically or sexually abusive parents following divorce (Leadership Council on Child Abuse and Interpersonal Violence).”

As a coalition, Custody Peace and One Mom’s Battle seek to highlight the impacts of domestic violence and how this dynamic of abuse presents within the family court system. These organizations seek awareness and change in the family court system, while honoring the 100(+) children in the United States who have been murdered by a parent after a custody court rejected the other parent’s plea for protection (Source: Center for Judicial Excellence). The coalition envisions a family court system that recognizes coercive control and post separation abuse while ensuring that child safety is the top priority in all rulings and decisions.

About One Mom’s Battle: The mission at One Mom’s Battle is to raise awareness and educate family court professionals on post separation abuse as it relates to co-parenting and the family court system (divorce, paternity, and child custody battles). Education on high-conflict individuals and post-separation abuse will allow family court professionals (judges, commissioners, magistrates, CPS workers, guardians ad litem (GAL), parenting coordinators (PC), custody evaluators, therapists, and attorneys) to recognize the abusive dynamics that play out in the family court system so they can make decisions that are in the best interest of children. Learn more at www.onemomsbattle.com

About Custody Peace: Through the cultivation of community, awareness building & advocacy Custody Peace is on a mission to ensure child-safety is the top priority in all custody cases and that everyone is free from coercive control and post-separation abuse. Learn more at www.custody-peace.org