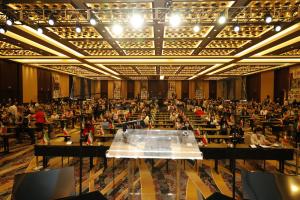 In the summer of 1988, the Iranian regime carried out the mass executions of 30,000 political prisoners, %90 of them belonging to the main Iranian opposition group, the Mujahedin-e-Khalq (MEK).”
— Dr. Majid Sadeghpour, OIAC Political Director

WASHINGTON, DC, U.S.A, October 26, 2021 /EINPresswire.com/ — On Thursday, October 28, 2021, a bipartisan summit will examine the impact of Ebrahim Raisi’s presidency in the defiant posture Tehran has taken vis-à-vis the nuclear talks and the continuing regional meddling. It will also deal with Raisi’s role in the 1988 massacre of 30,000 political prisoners. Speakers will put forth policy recommendations for the United States to consider in dealing with Raisi.

On the heels of the G20 summit, hundreds of Iranian American community leaders from across the United States and victims of Raisi’s crimes will join the conference in Washington, DC, to call for accountability and urge the U.S. to lead a decisive Iran policy.

The organizers support the 10-point plan of Mrs. Maryam Rajavi, the President-elect of the National Council of Resistance of Iran (NCRI) for a democratic, secular, and non-nuclear republic in Iran that promotes peace in the Middle East and beyond.

Background: The Iranian regime has been in serious violation of its nuclear commitments under the JCPOA and the NPT, as evident in the IAEA reports.

The most striking feature of Raisi’s cabinet is the rise of the senior former commanders of the Islamic Revolutionary Guard Corps (IRGC). Almost two-thirds of the 19 cabinet ministers are IRGC veterans. The appointments are a desperate attempt to deal with the volatile state of society and the prospects of popular uprisings. Protests have continued in Iran since 2017, as discontent mounted due economic and social crises, corruption and lack of freedoms.

In the summer of 1988, the Iranian regime carried out the secret mass executions of 30,000 political prisoners, ninety percent of them belonging to the main Iranian opposition group, the Mujahedin-e-Khalq (MEK). Ebrahim Raisi was a member of “death commission” responsible for carrying out this massacre. In December 2018, Amnesty International issued a comprehensive report declaring the 1988 massacre “ongoing crimes against humanity.” In the 117th Congress, H.Res.118 with 250 co-sponsors referred to the massacre as a crime against humanity and called for accountability.

Ebrahim Raisi Should be Investigated For Crimes Against Humanity in Iran, 1988 Massacre