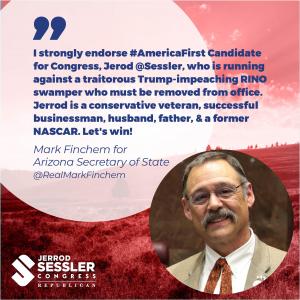 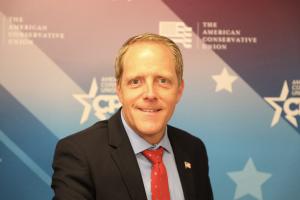 My aim in DC is to work on the structural problems that plague this country.”
— Jerrod Sessler

In a tweet on Thursday, Arizona House of Representatives member and Arizona Secretary of State candidate, Mark Finchem, added his endorsement to the growing list of distinguished political leaders who see Jerrod as the only candidate with the fortitude, experience, and political support to defeat Trump-impeacher Dan Newhouse, strengthen the ranks of America First constitutionalists in the House of Representatives, and restore conservative values to the fourth district of Washington.

Finchem is a strong supporter of the "Stop the Steal" movement and has been endorsed by President Donald Trump in his bid for Arizona Secretary of State.

Finchem tweeted, “I strongly endorse #AmericaFirst Candidate for Congress, Jerod @Sessler, who is running against a traitorous Trump-impeaching RINO swamper who must be removed from office. Jerrod is a conservative veteran, successful businessman, husband, father, & a former NASCAR. Let's win!”

Jerrod has already demonstrated his readiness to put himself out there for the country where many elected politicians have stepped back in fear of backlash. Jerrod has been to the border to assess the situation firsthand in readiness for his role in office. He has spoken out against the detention of January 6th protestors and given voice to Karl Dresch, who had been detained in a DC jail for over six months for the crime of parading. Jerrod is passionately concerned about forced vaccinations, has spoken out at school board meetings about the indoctrination of our children, and has joined with Election Integrity officials across the country to fight for free and fair elections.

To support Jerrod's campaign, please click the link below and be part of the solution.

And In the words of Jerrod, "Say YES to America!"