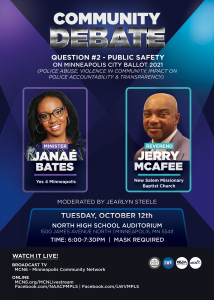 MINNEAPOLIS, MINNESOTA, UNITED STATES, October 7, 2021 /EINPresswire.com/ — The Minneapolis NAACP Branch and the League of Women’s Voters Minnesota have partnered to host a live debate on Minneapolis City Ballot Question #2 on whether to replace the Minneapolis Police Department with a Department of Public Safety. There is a lot of confusion among Minneapolis voters about what this proposal will do, and this debate is aimed at providing clarity to city residents.

The debate will be LIVE on Tuesday, October 12th, beginning at 6PM at Minneapolis North High School. The debate will provide the community an opportunity to hear both sides of the argument in a straightforward way to dispel the confusion that the ballot’s language has caused
for many residents.

Debating in favor of the no vote is community leader Rev. Jerry McAfee of New Salem Missionary Baptist Church. McAfee is also leading the 21 Days Of Peace initiative—a multi-denominational church-led effort that works with police on a community-first approach to making Minneapolis neighborhoods safer. McAfee oversees a group of volunteers who man neighborhood hotspots where crime is running rampant. Working in tandem with police,
respected community members help prevent violence before it occurs by reaching out to young people in distress.

Debating in favor of the yes vote is Minister JaNaé Bates. Bates is the Director of Communications for ISAIAH—a vehicle for congregations, clergy, and people of faith to act collectively and powerfully towards racial and economic equity in the state of Minnesota. She is also the Director of Communications for Yes 4 Minneapolis—the organization calling for the charter amendment to replace the Minneapolis Police Department with a Department of Public Safety.

The LIVE debate will be moderated by WCCO Radio Host Jearlyn Steele. Steele is a known vocal powerhouse in the region and brings more than two decades of on-air experience to the proceedings. Every Sunday night, listeners tune in to Jearlyn’s voice as she discusses a range of topics from politics to pop culture. Her work has garnered her a reputation for keeping the public informed and gained her community trust.

The debate will be broadcasted live on MCN6 Minnesota Community Network and streamed online at MCN6.org and on the NAACP Minneapolis and League of Women Voters Minneapolis facebook pages.

Local and national media are encouraged to cover the debate and help inform voters on this critical issue.

Voters and media can attend in person at the North High School Auditorium located at 1500 James Avenue North, Minneapolis, MN 55411. Masks are required.