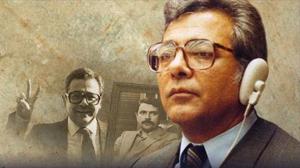 (PMOI/MEK Iran)&(NCRI): The court refers to the plaintiff’s reasoning that Rajavi was assassinated in 1990 following the massacre of 30,000 prisoners in 1988, which should be, according to his reasoning, legally qualified as genocide & a crime against humanity&genocide. 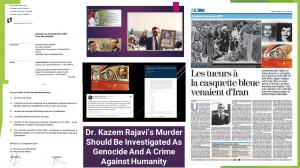 (PMOI / MEK Iran) and (NCRI): The assassination of Dr. Rajavi was carried out by a 13-member commando team sent from Tehran on the direct order of then Intelligence Minister Ali Fallahian, against whom a Swiss court issued an international arrest warrant in 2006. 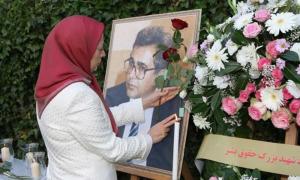 (PMOI / MEK Iran) and (NCRI): Mrs. Maryam Rajavi, described what she said was a welcome decision as an “essential and effective step to combat terrorism and to safeguard the security of European countries.” 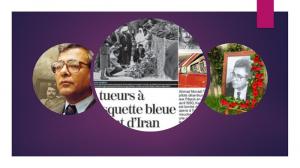 (PMOI / MEK Iran) and (NCRI): According to the court, contrary to the opinion of the federal prosecution, “for crimes with a historical dimension, such as genocide and crimes against humanity,” the imprescriptibility could be maintained. 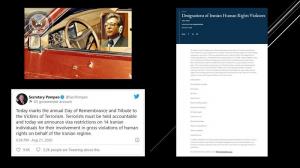 (PMOI / MEK Iran) and (NCRI): 13 Iranians who were involved in the assassination of Dr. Kazem Rajavi in Switzerland in 1999 have been named by the U.S. State Department. They now face visa restrictions preventing them from entering the U.S. 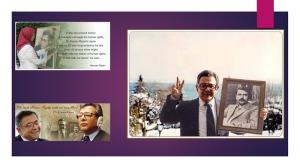 (PMOI / MEK Iran) and (NCRI): Mr. Rajavi was killed on the spot. The perpetrators left Swiss soil in the hours following the crime and have since been the subject of international arrest warrants issued by the Swiss authorities, warrants which have today been lifted. “ 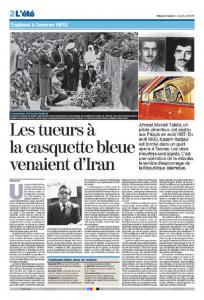 (PMOI / MEK Iran) and (NCRI): “The Public Prosecutor’s Office of the Canton of Vaux has also demonstrated that the elimination of Iranian opponents was being carried out in several European countries. 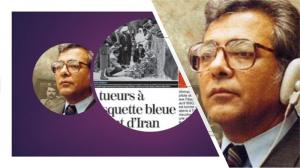 (PMOI / MEK Iran) and (NCRI): The Federal Tribunal thus rejected the arguments of the public prosecutor’s office of the Confederation and ordered it to investigate the case in the context of crimes against humanity and genocide.

Dr. Rajavi's death can be linked to a series of other assassinations that occurred around the same time, all of which symbolize the regime's attempt to eliminate the organized Resistance Movement.”
— NCRI

PARIS, FRANCE, October 4, 2021 /EINPresswire.com/ — The Swiss Federal Criminal Court made a judgment on September 23 that postponed the scheduled closing of the Dr. Kazem Rajavi assassination case. In 1990, a 13-member murder team working on orders from the regime's top officials assassinated Dr. Rajavi near his Geneva house.

Dr. Rajavi was the National Council of Resistance of Iran’s (NCRI) representative in Switzerland. The criminals were quickly arrested, but not before fleeing back to Iran. The arrest warrants for the agents and their handler have never been carried out by any willing authority.

After the public prosecutor for the Swiss canton of Vaud announced the investigation would be closed soon, counsel for the Iranian opposition contended in court that Dr. Rajavi's murder was part of a much greater crime that may be punished as genocide at the International Criminal Court.

Two years after the slaughter of political prisoners in the summer of 1988, he was assassinated.

Dr. Rajavi was assassinated in accordance with the same fatwa that accompanied the 1988 massacre, in which then-Supreme Leader Ruhollah Khomeini proclaimed that all members and supporters of the People’s Mujahedin of Iran (PMOI / MEK Iran) were guilty of "enmity against God" and should be hence executed.

Dr. Rajavi's death can be linked to a series of other assassinations that occurred around the same time, all of which symbolize the regime's attempt to eliminate the organized Iranian Resistance Movement.

The religious content of Khomeini's fatwa has been interpreted by some legal scholars as evidence for a charge of genocide against any and all high-level participants in the 1988 massacre or subsequent assassinations.

Some of these analyses were delivered in August at an Iranian Resistance conference held around the time of Ebrahim Raisi's inauguration as the regime's president.

Raisi was one of four members of the Tehran "death commission" who oversaw the massacre, and his election to the presidency has sparked renewed calls for an international probe that questions Tehran's impunity and leads charges.

Participants at the August conference also stressed that, in the wake of a UN Security Council resolution, such prosecutions might take place at the International Criminal Court or in any Western federal court, based on the principle of universal jurisdiction.

The possibility of such action being conducted independently within one federal jurisdiction was bolstered earlier this month when criminal charges against former Iranian jail director Hamid Noury were filed.

Following Noury's arrest in 2019, Swedish authorities opened the case, which was supported by reference to universal jurisdiction.

The current regime's treatment of participants in the 1988 massacre has made it plain that no such accountability would be forthcoming.

The nomination of Raisi as president is the strongest example of this yet.

The participation of a European delegation at Raisi's inauguration, in the aftermath of popular calls for him to be ostracised, delegitimized, and eventually punished for genocide, reinforced that display of impunity on the international stage.

Following the inauguration, the Iranian Resistance issued a statement warning against Western political and legal initiatives that could have bolstered Tehran's impunity.

The conclusion of the Swiss case against Dr. Rajavi's assailants would have been an excellent example.

However, the Swiss court's judgment on September 23 was a step in the right direction.

Mrs. Maryam Rajavi, the Iranian opposition leader, praised the judgment as a "historic turning point" and a "necessary step in countering the clerical regime's unbridled terrorism."

Mrs. Maryam Rajavi reminded the international community of recent incidents that demonstrate the regime's continued dedication to oppression and terror. “Terrorism and repression are inherent and indispensable to the ruling religious tyranny.”

Assassination of Kazem Rajavi to be investigated in context of “genocide,” Swiss court rules