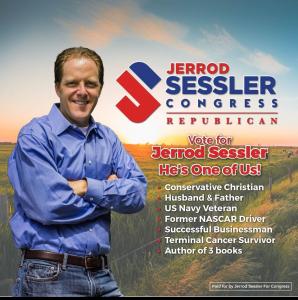 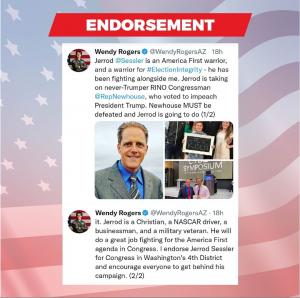 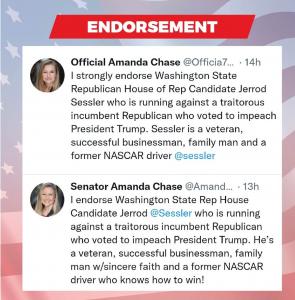 We must reinvigorate the institutions of American democracy by shining light on the deep-rooted corruption that has infected Washington DC.”
— Jerrod Sessler

In a two-part post on Friday, Senator Rogers tweeted, “Jerrod @Sessler is an America First warrior, and a warrior for #ElectionIntegrity – he has been fighting alongside me. Jerrod is taking on never-Trumper RINO Congressman @RepNewhouse, who voted to impeach President Trump. Newhouse MUST be defeated and Jerrod is going to do it. Jerrod is a Christian, a NASCAR driver, a businessman, and a military veteran. He will do a great job fighting for the America First agenda in Congress. I endorse Jerrod Sessler for Congress in Washington’s 4th District and encourage everyone to get behind his campaign.”

Rogers’ endorsement of Sessler was followed shortly by a second endorsement of him by Senator Amanda Chase. She tweeted similar messages from her two Twitter accounts which read, “I strongly endorse Washington State Republican House of Rep Candidate Jerrod Sessler who is running against a traitorous incumbent Republican who voted to impeach President Trump. Sessler is a veteran, successful businessman, family man, and a former NASCAR driver @sessler”

Sessler responded to these endorsements tweeting, “It is an honor to stand shoulder to shoulder in defense of America with Amanda Chase, Wendy Rogers, and other leaders across the nation. We will win.”

Sessler has been making waves in the political community for his outspoken support of election audits and changes restricting fraud in our election system. He has also been involved in championing the rights of January 6th prisoners, including filming a video with Karl Dresch, a January 6th protestor who had been locked in a DC jail for over 6 months. The video went viral and was covered by several news sources and organizations, including an article in the Washington Post. Sessler is scheduled to return to DC in October to hold a protest rally outside the jail, followed by a “Pray for America” event led by him.

Sessler is running against incumbent Congressman Dan Newhouse, who voted to impeach President Trump and in favor of the January 6th commission. He is an unabashed Christian, has been married to his wife for 25 years, and has three children.