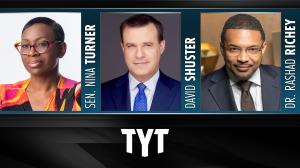 The addition of these powerful established voices to the TYT talent pool signals a bold new chapter for the nation’s largest progressive news network as TYT enters a period of aggressive growth.

As part of its strategy leading into 2022, TYT is going to focus on growing their subscription business under new leadership

I am excited to join TYT and support groundbreaking independent journalism focused on encouraging viewers to be critical thinkers engaged in our political process.”
— Sen. Nina Turner

– As part of its strategy leading into 2022, TYT is going to focus on growing their subscription business under new leadership –

TYT, the largest progressive news network in America, expands its lineup of hosts and commentators, with former Ohio State Senator Nina Turner, former MSNBC host David Shuster, and radio host Dr. Rashad Richey joining the progressive network. The addition of these powerful established voices to the TYT talent pool signals a bold new chapter for the nation's largest progressive news network as TYT enters a period of aggressive growth. As part of its plans for the year, TYT has a renewed focus on their subscription business under the leadership of the network’s Chief Marketing Officer, Praveen Singh, who will focus on strategic growth and hiring in the coming months.

TYT founder and CEO Cenk Uygur said, "Here comes TYT! We're going to start expanding very aggressively. We have been building for this moment for 20 years and now we're ready to take the top online progressive network and turn it into one of the giants of media. Nina Turner is one of the biggest news stars in the country and has the single strongest voice in the progressive ecosystem. I couldn't be more proud of adding her to the network. Rashad Richey is the fastest growing talent in our industry and his rise through the ranks has been stunning. David has outstanding courage and is an excellent broadcaster. The things that unite all three are that they are the strongest and the smartest in the business. There's going to be a lot more where that came from. We'll be hiring more soon."

Turner will appear as a regular guest host on The Young Turks, The Damage Report, Indisputable with Dr. Rashad Richey, and The Conversation. In addition, an exclusive limited series featuring Turner is being developed by Judith Benezra, TYT’s Head of Programming, to launch in the fourth quarter, adding to TYT’s podcast and member content.

Sen. Turner said, "I am excited to join TYT and support groundbreaking independent journalism focused on encouraging viewers to be critical thinkers engaged in our political process. As a radical truth teller, our time together will be a soul stirring awakening to activate and inspire every viewer to fully engage in the movement within their own community. We will explore issues and stories impacting our movement's work to build progressive power, amplify our agenda and support our champions. My hope is that these deep laser focused conversations will bring clarity, focus and motivation to our supporters as we move forward during this pivotal time in our nation's history."

Most recently, Turner joined Cenk Uygur and Killer Mike in Ohio for an Economic Justice Town Hall hosted by TYT. During her congressional run, Turner selected TYT to announce the news that the Justice Democrats had endorsed her campaign. She has also been part of several special programming events on the network, including the Democratic debate green room interviews, the 2020 Election coverage, and on The Young Turks Friday Power Panel. She initially appeared on TYT during the 2016 Democratic National Convention.
——————–
The network also announced the addition of Emmy Award-winning news broadcaster David Shuster. He will serve as a host for the network. Shuster became a TYT contributor in December 2020 and is now the lead host for the Rebel HQ programming. Since joining, Shuster’s videos have garnered 197 million views. His video, “Lawyer Catches Police Officers Breaking The Law,” posted on July 14, 2021, is the 9th most viewed video in the history of the channel.

"I've been a longtime admirer of Cenk [Uygur], Ana [Kasparian], and the rest of the team. The opportunity to leverage my broadcast reporting skills and experiences for TYT is an honor! While my content still covers subjects I've reported on for decades — including politics, legal issues, and world affairs — I've spent a lot of time this past year focused on race relations, police brutality, and white privilege. Thanks to the talents, passions, and phenomenal reach of TYT, we are making a difference,” Shuster said about joining TYT.

Shuster is best known for his work at NBC News and MSNBC, he anchored the channel’s prime time coverage of breaking news stories including politics, natural disasters, and the death of Michael Jackson. As a field correspondent, his assignments included covering the Iraq war, the selection of a Pope, and Hurricane Katrina. He also hosted his own news shows and frequently filled in for “Countdown with Keith Olbermann” and “Hardball with Chris Matthews.”
——————–
In addition to news of Turner and Shuster joining TYT, the network most recently announced a partnership with Acast to expand its podcast presence under the new leadership of TYT’s Chief Marketing Officer, Praveen Singh.

On September 13th, the network added Indisputable with Dr. Rashad Richey to its podcast lineup. Richey was most recently awarded with the Global Icon Award by the Black Media Honors and was recognized with an award by the White House for his work with gang-affected and gang-affiliated youth and social advocacy. TYT’s e-commerce wing, ShopTYT, has also announced corresponding new merchandise going on sale today for ‘Indisputable.’

TYT is growing their business to reach people who want a progressive take on news and politics in time for the 2022 midterm elections. By adding new progressive voices, TYT plans to continue its dominance in total views and engagement in the news and politics vertical. As part of the strategy, the team is looking to strategically grow its audience and subscription base. In February 2022, TYT will celebrate its 20th anniversary with more growth opportunities on the horizon.