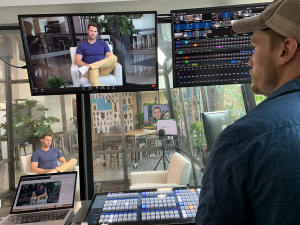 The ability to create a local news network would be instrumental to effectively creating a stronger Aurora. A local news platform that could become 100% self-sufficient was instrumental.”
— Mayor Richard C. Irvin

Jimi Allen, Bureau Gravity’s CEO and Creative Director, is self-funding the creation and implementation of Talking Cities. After several months of non-stop development and design, Talking Cities is ready to launch. As a dedicated Aurora citizen and father of two, he understands the need to establish a strong local news network. “Talking Cities will be more than a news site; it will be a center point for a community to share its news and events to help shape our city and the people around us,” Jimi said. “We all need a place to share and promote our news & I hope that Talking Cities will be that place.”

Bureau Gravity, a mid-size marketing agency based out of Aurora, Illinois, developed the Talking Cities platform specifically to create a news ecosystem that is advertiser funded, not dependent on an ongoing municipal investment. Mayor Irvin saw Jimi’s vision early on. “The ability to create a local community news network would be instrumental to effectively creating a stronger Aurora,” said Mayor Irvin. “The fact that a local news platform that could eventually become 100% self-sufficient was instrumental as we need to be laser-focused on our fiscal spending.”

According to statista (July 2021), online video consumption is one of the most popular internet activities worldwide. Improvements in mobile technology and broadband networks have helped make watching videos become a significant part of users’ online experience. Video sharing and streaming websites are used for educational, informative and entertainment purposes. These sites are also social spaces where people can like, comment on, and share online videos with others. During the COVID-19 pandemic in 2020, entertainment was the most popular reason to watch mobile videos among young Americans, followed by personal growth and wellness.

The official launch will be a live and virtual event. Join more than 100 business and community leaders that have already RSVP’d to be in attendance. The event will have guest speakers, local community and business leaders, and more. Register Now and network with guests, chat with on-air talent, strategize future partnerships and much more.