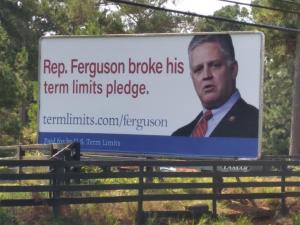 Drew Ferguson made a promise to the voters of his district to co-sponsor the U.S. Term Limits amendment if elected to CongressE. Now he is choosing to break that promise. ”
— Nicolas Tomboulides

ATLANTA, GA, UNITED STATES, August 26, 2021 /EINPresswire.com/ — U.S. Term Limits is calling out Rep. Drew Ferguson (GA-3) for breaking his pledge to co-sponsor and vote for the U.S. Terms Limits amendment with a billboard in his district informing voters of his broken pledge. Ferguson pledged to voters that he would support the U.S. Term Limits amendment limiting U.S. Representatives to three terms and U.S. Senators to two terms. Ferguson signed the pledge to voters while seeking their support in a close 2016 primary contest. Term limits was a key issue he campaigned on in 2016. Since being elected, Representative Ferguson has gone back on his pledge. The billboards inform voters of Ferguson’s broken pledge on term limits.

The U.S. Term Limits amendment has been introduced in Congress calling for six years total in the U.S. House of Representatives and twelve years maximum in the U.S. Senate. Senate Joint Resolution (SJR3), sponsored by Texas Senator Ted Cruz has 15 sponsors and cosponsors. House Joint Resolution 12 (HJR12) sponsored by South Carolina Rep. Ralph Norman has 69 House members on board. Support is expected to exceed 100 Congress members during the 117th Congress.

“Drew Ferguson made a promise to the voters of his district to co-sponsor the U.S. Term Limits amendment if elected to Congress,” said Nicolas Tomboulides, Executive Director of U.S. Term Limits. “Now he is choosing to break that promise. We are alerting voters to his broken promise. Congressman Ferguson should apologize to voters and keep his word.”

U.S. Term Limits is the oldest and largest grassroots term limits advocacy group in the country. We connect term limits supporters with their legislators and work to pass term limits on all elected officials, particularly on the U.S. Congress.