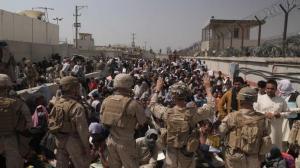 The scene at Kabul airport, August 2021

WASHINGTON, DC, UNITED STATES, August 26, 2021 /EINPresswire.com/ — After the Biden Administration’s disastrous withdrawal from Afghanistan where the fate of up to 1,000 Americans trapped behind enemy lines hangs in the balance, the future of the entire region and even the world is at risk due to the rising tide of jihadism brought on by President Biden’s hasty withdrawal. Once our troops have completely withdrawn, we will be forced to watch helplessly as mass executions and brutal murders take place across the country. This will intensify America’s rapid decline on the world stage, possibly including the disintegration of NATO, and will reinforce the view of America as, in the words of President Nixon, “a pitiful, helpless giant,” and most importantly, as an unreliable ally.

“It’s hard to imagine a single act more destructive to America’s stature and standing in the world than Joe Biden’s botched pull out of Afghanistan,” said American Mideast Coalition for Democracy's Co-Chair, Tom Harb. “He has single-handedly strengthened every Islamist/jihadist movement the world over, from the Muslim Brotherhood, to Al Shabaab and Boko Haram, to al Qaeda and ISIS, to Hezbollah and the Houthis. All these groups and movements will be emboldened. The estimated 30,000 ISIS fighters in Syria will have safe haven there and the Muslim Brotherhood will likely use Afghanistan as a base to formulate their next strategy. I wouldn’t be surprised to see Qatar bringing in Al-Jazeera to broadcast Taliban propaganda all over the world.”

“After 20 years of relative freedom and opportunity for women in Kabul, they will now be subject to strict Sharia law which reduces women and children to being the absolute property of men,” began AMCD Regional Director, Manda Zand Ervin. “Just like what happened to the women of Iran after the revolution, the women of Afghanistan will sink into a hopelessly dire situation. The liberated women of Iran have been fighting back and are in prisons, the liberated Afghan women will be killed and their young daughters will be taken and raped by the Taliban men.”

“The Mullahs of Iran will now step up their support for terror groups like Hezbollah and Hamas and they will likely step up attacks on Israel,” added AMCD Co-Chair Hossein Khorram. The Iranian regime may also lend support to the Taliban as it forms a new government in Afghanistan. Iran has a long history of harboring al Qaeda and other terrorist groups. I expect that support to increase now that America is out of the picture.”

“President Biden is projecting weakness and our enemies see this as a great opportunity,” offered AMCD Co-Chair, John Hajjar. “China may well move on Taiwan and Russia on Eastern Ukraine. They see America as riven on the inside over politics and race. We’re just not capable of putting up a united front to counter these powerful actors. No one trusts us, no one believes us and very few believe IN us anymore. The American democratic model for governance is losing its legitimacy, while communism, fascism, and Islamism are all on the rise. President Biden has made the world a much more dangerous place.”

“When the bloodletting in Afghanistan begins in earnest and all those unlucky enough to be trapped behind enemy lines are summarily tortured and executed, America’s humiliation will be all but complete,” added AMCD Executive Director, Rebecca Bynum. “The Taliban will demonstrate what happens to those who trust America and believe our promises. Nothing could be more destructive to world peace and stability. Terror attacks on American soil are certain; another world war is possible; and Joe Biden is unfit to be Commander-in-Chief during this dangerous time.”