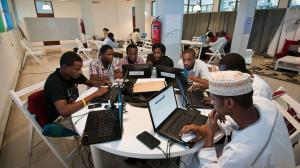 The move is in line with the institute’s goal of empowering low-income, unemployed, underemployed, women, and other underrepresented individuals, with the skills sets and knowledge to remove them from a cycle of poverty while creating generational wealth.

The deal in Tanzania follows on the heels of CIT’s agreement in March of 2021 in Uganda. The series of deals confirm the educational venture by CIT in the region of East Africa. Chief Education Officer Da’shone Hughey shared his experience in Uganda and said, “The experience has been great in Uganda. Once we review the program’s features and nuances in Uganda, we will begin training in Tanzania. The Tanzania deal is part of CIT’s strategy in East Africa and the continent of Africa.”

There has been a steady increase in the demand for IT solutions for businesses and individuals across the globe. Software Engineers have become one of the hottest solutions providers in recent times. Unfortunately, the increasing demand for such professionals has not been particularly met by a corresponding level of supply. However, the CODEIT Institute of Technology team looks poised to change this narrative as substantiated by the recent partnership deals in Africa.

Co-Founder – Prosperity Paul of Kipanga Ventures LTD said, “I spent several years as a Software Engineer in Nairobi, Kenya. When I returned to Tanzania, I found it extremely difficult to find Software Engineers with the skills necessary to collaborate with on various projects. That was four years ago and the situation here in Tanzania still has not changed. The opportunity to work with CIT will help us increase the number of skilled Software Engineers significantly and position us for the coming Fintech market in Tanzania where we hope to attract tech investments.”

About CODEIT Institute of Technology:

Headquartered in Newark, NJ, the institute is the first and only Nationally Recognized U.S. Department of Labor Apprenticeship Program in the state of New Jersey, specializing in Software Engineering and only one (1) of two (2) entities in the state of New Jersey to be designated an AWS Amazon Academy Institution. CIT aims to banish poverty through tech education by enabling people to recreate themselves through technology.