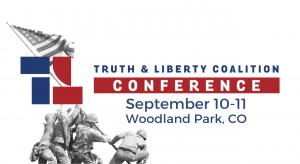 WOODLAND PARK, COLORADO, UNITED STATES, August 9, 2021 /EINPresswire.com/ — The Truth & Liberty Coalition, a nonprofit organization inspiring ordinary people to participate in government, will hold a conference on the campus of Charis Bible College, Sept. 10-11. The conference will empower citizens to influence our state and nation with positive change and biblical values. Founded on the American ideal that government should be “of the people, by the people and for the people,” the Truth & Liberty Coalition’s mission is to educate, unify and mobilize Christians to stand for biblical truth in the public square.

Attendees will have the opportunity to join interactive workshops facilitated by influential leaders who will share useful information on how to get involved and act. Topics include reaching ethic communities, how to start a culture impact team, election integrity, opportunities for influence in 2022, and much more. Numerous conservative organizations will have booths at the conference where attendees can engage and find opportunities to get involved.

The conference will feature a musical celebration of America and 20th anniversary commemoration of Sept. 11, 2001. The performances will inspire and motivate people to advance the ideals that make America great!

The Truth & Liberty Conference is a free event, but registration is requested. Children are welcome but childcare is not provided.

For questions please contact: Michael Perini at 719-651-5943 or
newstruthlibertycoalition@gmail.com

About Truth and Liberty Coalition:
Truth & Liberty Coalition, Inc. is a 501(C)(4) non-profit based in Woodland Park, Colorado. Established by Andrew Wommack and other Christian leaders, the goal is to educate, unify and mobilize Christians and conservatives to become involved in the affairs of their community and government. The Coalition provides information to its viewers through weekly live streams featuring various influential guests. Their website houses numerous resources that connect visitors with many organizations across the nation with whom they can partner. Their goal is to enable ordinary citizens to make an impact in their local areas. Find Truth & Liberty Coalition at truthandliberty.net, on Facebook and on Twitter.

About Andrew Wommack:
Andrew Wommack is president and founder of the Truth & Liberty Coalition, Andrew Wommack Ministries, and Charis Bible College. He and other Christian leaders established the Truth & Liberty Coalition to educate, unify and mobilize believers in Jesus Christ to affect the reformation of nations through the seven mountains of cultural influence. Since 1968, he has taught God’s Word with clarity and simplicity, emphasizing the unconditional love and grace of God. His vision is to spread the Gospel as far and deep as possible through his daily Gospel Truth television program, broadcast nationally and internationally, as well as through GospelTruth.TV, his internet television network.