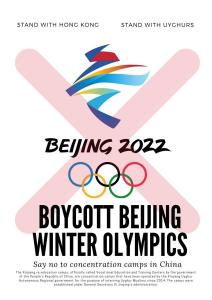 Organizations plan to seek an injunction to stop the Beijing Olympics on the ground that China will use it to legitimize its claims to the South China Sea.

WASHINGTON, DC, UNITED STATES, August 8, 2021 /EINPresswire.com/ — In an open letter to the International Olympic Committee, 114 Vietnamese organizations urge the IOC to change venue for the 2022 Winter Olympics. In reference to events in Xinjiang that the US and several other countries have deemed constituting a genocide, the letter wrote: “We believe that the participation in the Winter Olympics in Beijing will be misconstrued or misrepresented as endorsement of the CCP’s authoritarian rule and blatant violation of civil and human rights. This is contrary to our obligation to prevent and to punish the crime of genocide as per Article I of the Genocide Convention.”

According to these organizations, “the spectacles of the 2022 Winter Olympics in Beijing will be not only international prestige but also domestic legitimation” for the Chinese Communist Party. While the full scale of the atrocities in Xinjiang remains unknown, there have been multiple reports of the CCP’s imprisoning millions of Uyghurs, ethnic Kazakhs and members of other minority groups in internment camps with forced labor, tortures, murders, forced abortions, rapes, sterilizations and organ harvesting. The official position of China is that these are “re-education camps” for potential terrorists and efforts to stop Uyghur women from being “baby-making machines”.

The open letter also accuses the CCP of the misinformation and propagation of the pandemic, illegal occupation of the South China Sea, deprivation of people’s livelihood downstream of the Mekong River, ecocide of natural resources, transmission of lethal synthetic narcotics, intellectual property theft, economic espionage, and human trafficking. It also mentions the bullying of democratic Taiwan, suppression of human rights of the Chinese people, crackdown of Hongkong’s democracy, and support of the military coup in Myanmar.

The Chinese government recently criticized NBC’s coverage of the 2020 Tokyo Olympics for displaying an "incomplete" map of the country for not including Taiwan and the South China Sea, calling it an attempt to "play political tricks and self-promotion to achieve ulterior motives." The signatory organizations stated that this incident indicates that “China will use the Winter Games to legitimize its claims and infringement of other countries’ sovereignty, contrary to the IOC’s stated intent of being politically neutral.” If the IOC cannot guarantee against such assertions, the open letter states, “our organizations will lead a world-wide effort for an injunction to stop these violations of other nations’ sovereignty.”

The open letter also submits to the IOC a list of 378 parliamentarians from 12 Winter Olympic countries who support moving the 2022 Olympic Games.