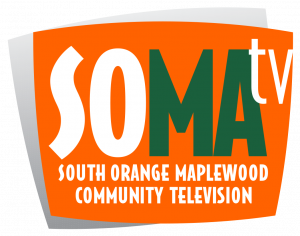 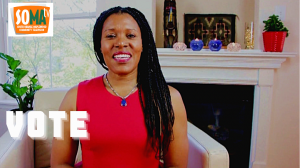 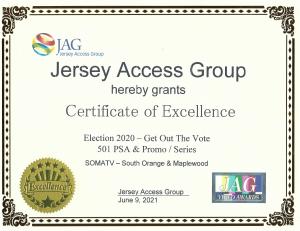 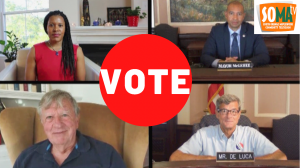 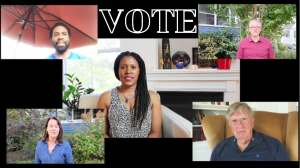 MAPLEWOOD/SOUTH ORANGE, NEW JERSEY, UNITED STATES, August 2, 2021 /EINPresswire.com/ — South Orange Maplewood Television (SOMAtv) was granted the prestigious Award of Excellence from the Jersey Access Group (JAG) for its Get Out The Vote public service announcement series, which drew responses from local residents in languages as diverse as Nepalese and American Sign Language. The Award of Excellence, the highest honor in the JAG Awards annual competition, was won in the Public Service Announcements and Promo Series category and was presented to the station during a virtual ceremony at the 2021 Eastern Expo Conference. This is SOMAtv’s first award since the station went on the air in 1994.

The Get Out The Vote public service announcement series was conceived by Dustin Dumas, who became the SOMAtv station manager in October 2018 and is the host and producer of Dustin’s Kaleidoscope. Community members were asked to submit short video clips. These clips were edited to create public service announcements encouraging the community to vote in the 2020 presidential election. This series aired on SOMAtv and has been posted online, reaching people in the South Orange Maplewood community and throughout the country.

“I conceived the series of public service announcements as a way to engage our community during the pandemic when our studio was closed. I wanted to encourage our community to vote in the 2020 presidential election,” said Dumas, “I asked the community to submit videos to help get out the vote and the only requirements were that they had to be nonpartisan and not affiliated with any special interest group. We received many creative videos in Nepalese, French, English, American Sign Language and Spanish.”

The JAG Awards are annual awards that honor excellence in local and regional Public, Education and Government (PEG) programming.

“It is an honor to receive the Award of Excellence, knowing that this is our first award since the station’s inception in 1994,” said Dumas. “To receive it during a pandemic was especially rewarding, knowing that our community came together during these unprecedented times. I look forward to continuing to help our community, whether it is assisting our producers in creating original content or assisting our partners with outreach for their programs.”

In July, the Township of Maplewood presented Dumas, with a Resolution of Recognition and Appreciation for SOMAtv being awarded a JAG Award and for her leadership of the station. As station manager, Dumas began syndicating SOMAtv shows, bringing them from their original airing at a single New Jersey station to airing on 36 stations in 12 states, from California to New Hampshire.

SOMAtv is the municipal community television station for South Orange Village and Maplewood Township. Both municipalities are in New Jersey and serve a community of approximately 42,500. SOMAtv produces original programming and its shows are seen on 36 stations in 12 states from California to New Hampshire.

Dustin’s Kaleidoscope is a long-running show on SOMAtv that covers a variety of topics from artists to genealogist.

JAG is a consortium of community television stations located throughout the state of New Jersey and parts of Pennsylvania. It was founded in 2000 and supports and develops Public, Education, and Government (PEG) cable access stations.