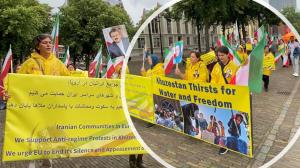 (NCRI) and (PMOI / MEK Iran): With that in mind, the PMOI’s parent coalition, the National Council of Resistance of Iran, issued a statement on Sunday which called attention to the early reports of fatal shooting incidents and urged the United Nations Secretary-General. 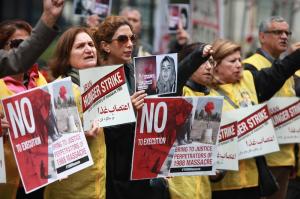 (NCRI) and (PMOI / MEK Iran): The international community should realize this fact and put more pressure on the regime that its Supreme leader, President, head of Judiciary, and speakers of the Parliament are henchmen of the 1988 massacre. 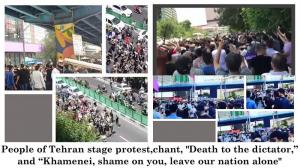 (PMOI / MEK Iran) and (NCRI): People of Tehran stage protest, chant, “Death to the dictator,” and “Khamenei, shame on you, leave our nation alone”. 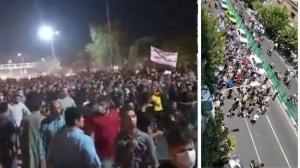 (NCRI) and (PMOI / MEK Iran): Protests erupted in Tehran, days after protests in Khuzestan. People in Tehran chanted slogans against the regime officials and condemned the regime’s warmongering policies. They were heard chanting “neither Gaza nor Lebanon”. 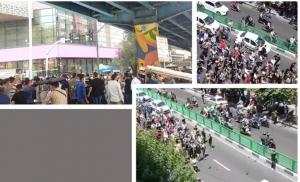 (PMOI / MEK Iran) and (NCRI): The angry youth and people of Tehran were demonstrated in Jomhouri Avenue and other parts of central Tehran. 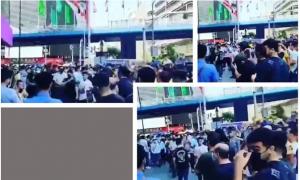 (NCRI) and (PMOI / MEK Iran): The crowd also chanted “Tanks, guns (are not going to save your regime), the mullahs must go”. 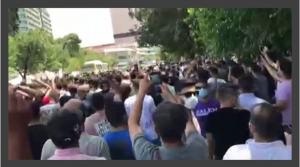 (NCRI) and (PMOI / MEK Iran): Mrs. Maryam Rajavi, the President-elect of the National Council of Resistance of Iran (NCRI), hailed the rebellious youth in Tehran. 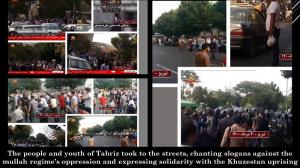 (NCRI) and (PMOI / MEK Iran): the people Tabriz took to the streets, chanting slogans against the clerical regime’s oppression and expressing solidarity with the Khuzestan uprising.

That sentiment has been affirmed by the Iranian Resistance leader Maryam Rajavi in a number of statements since protests began on July 15.

PARIS, FRANCE, July 28, 2021 /EINPresswire.com/ — In the nearly two weeks since protests broke out over water shortages in the Iranian province of Khuzestan, there have been reports of military convoys approaching areas of unrest, as well as authorities opening fire on crowds of protesters using live ammunition. Those reports have emerged only gradually on account of far-reaching and long-lasting internet blackouts designed to limit the spread of information about government crackdowns and about the protests themselves.

The People’s Mojahedin Organization of Iran (PMOI/MEK) has reported that at least a dozen individuals were killed in those crackdowns. Reports from the leading pro-democracy opposition group suggest that the number will climb as soon as more information is assessed, but twelve is the number of victims who have already been identified by name. Those victims include two individuals who were only 17 years old and at least five who were under the age of 30.

These fatalities seem to be contributing to the ongoing growth and expansion of the unrest. On Friday, the funeral for one of the regime’s 17-year-old victims, Hadi Bahmani, reportedly became a staging ground for new anti-government demonstrations. Elsewhere, protests emerged with the specific intention of showing solidarity with those demonstrations that had already been attacked, as well as those individuals who were killed in those attacks.

In the cities of Zanjan and Bojnurd, to name just two, protesters have been heard to call direct attention to the killings with their slogans, chanting, for instance, “Iranians die, but we will not accept humiliation.” Such statements seemingly affirm the intention of many activists and protest organizers to remain active in the streets regardless of the regime’s efforts at violent repression.

That sentiment has been affirmed by the Iranian Resistance leader Maryam Rajavi in a number of statements since protests began on July 15. On Monday, she tweeted, “Hail to the defiant youths in Tehran” and credited them with sounding the “death knell” of the theocratic regime through their defiant activism. “The young protesters in Tehran display the Iranian people’s firm resolve to establish democracy and national sovereignty,” she added.

This resolve has arguably found its most significant outlets in recent years, as Iran has been rocked by a series of uprisings and related protest movements, many of them expressing a direct challenge to the theocratic system and an appeal for regime change leading to a democratic alternative.

The first nationwide uprising began in the final days of 2017 and continued through much of the following month, during which time Supreme Leader Ali Khamenei begrudgingly admitted that the scale of the unrest was guaranteed by months of planning from the MEK. That scale was then exceeded by a similar uprising in November 2019, which prompted some of the worst repression in decades by Iranian authorities.

More than 1,500 people were killed within days of the latter uprising breaking out, and more than 12,000 people were arrested soon thereafter. Many of these were subjected to torture for months on end, yet while that torture was still ongoing, demonstrations broke out once again across at least a dozen Iranian provinces in January 2020.

The coronavirus pandemic ultimately helped to forestall the resurgence of nationwide protests afterward, but numerous Iranian officials have continued to issue warnings about MEK influence and popular unrest ever since. The recent and ongoing protests in Khuzestan and surrounding regions are the latest reminder of how well-founded those concerns are. And for critics of the Iranian regime, they are also a reminder of how desperate that regime is to restore order and limit the proliferation of organized efforts to establish a new system of government.

With that in mind, the PMOI’s parent coalition, the National Council of Resistance of Iran, issued a statement on Sunday which called attention to the early reports of fatal shooting incidents and urged “the United Nations Secretary-General, the UN Security Council, the European Union, and its member states to condemn these crimes against humanity” and to take steps that may lead to prosecution or similar accountability for leaders of the Islamic Republic who have contributed to similar crimes throughout the regime’s history.

Of course, the NCRI did not wait for the latest outbreak of unrest to issue this appeal. A number of Iranian activists and their Western political advocates delivered speeches during the recent, three-day Free Iran World Summit and called attention to Tehran’s shameless embrace of its worst human rights abuses. Many of those speeches pointed to the August 5 inauguration date for Iran’s President-select Ebrahim Raisi as a potential deadline for Western measures to demand accountability.

Raisi was ostensibly elected on June 18, but the vast majority of eligible voters sat out the election in protest. His campaign had been shadowed by protests which decried him as the “henchman of 1988,” in reference to his role as one of the leading figures on the Tehran “death commission” that oversaw the massacre of 30,000 Iranian political prisoners in the summer of that year.

Raisi’s appointment to the presidency came about two years after the regime’s supreme leader made him the head of the national Judiciary and about a year and a half after he oversaw key aspects of the bloody crackdown on the November 2019 uprising. It is generally understood that his long history of human rights abuses was a prime qualifier for his presidential bid, which remained more or less uncontested after Khamenei indicated that Raisi was his personal choice to take over for the outgoing President Hassan Rouhani.

Since being confirmed as president-elect, Raisi has been replaced in the Judiciary by Gholamhossein Mohseni Ejei, another figure with an established record of human rights abuses and someone who has already shown himself to be keen on mass arrests and aggressive prosecution in the midst of the current protest movement.

That movement first emerged on or about July 15 as Khuzestan was suffering from drought, made worse by government-linked damming projects, which accelerated the drying of vital waterways and reduced the availability of water for both agriculture and consumer use. It is estimated that over a quarter of Iran’s population of 83 million is already affected by similar shortages and that the number could easily grow if the issue remains unresolved in the wake of the protests.

Persons familiar with the Iranian regime tend to agree that it is far more likely that Raisi will attempt to address the situation by stepping up the current repression rather than by examining the issue and proposing solutions that counteract the ill-effects of damming projects that were implemented under the leadership of figures who had much more experience in governmental and infrastructural affairs than he has.

As the people of Iran have emphasized in their slogans, the main problem in Iran is the regime itself, and the only solution for Iran’s problems is the regime change by the people of Iran and their just resistance. The international community should realize this fact and put more pressure on the regime that its Supreme leader, President, head of Judiciary, and speakers of the Parliament are henchmen of the 1988 massacre.

Protests in Khuzestan province enjoy support from other provinces in Iran