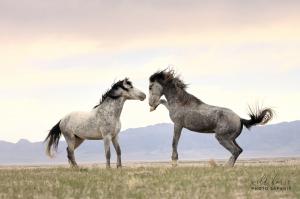 Ending Transport of Horses Across State and National Lines Will Have the Effect of Banning the Trade, Notes Animal Wellness Action

We applaud the Members of Congress who are leading this measure and will continue to bring new and creative solutions to ending the most egregious abuses in the equine world”
— Marty Irby, executive director at Animal Wellness Action

WASHINGTON, DC, USA, June 25, 2021 /EINPresswire.com/ — This week, U.S. Reps. Troy Carter, D-La., Brian Fitzpatrick, R-Pa., John Katko, R-N.Y., Dina Titus, D-Nev., and Steve Cohen, D-Tenn. introduced an Animal Wellness Action-conceived amendment to H.R. 3684, the Investing in a New Vision for the Environment and Surface Transportation in America (INVEST) Act, to ban transport of equines across state lines or to Canada or Mexico for slaughter for human consumption. This amendment, if enacted into law, would prevent a cruel and predatory trade that claims the lives of tens of thousands of horses and burros a year at foreign abattoirs.

The original amendment was first filed by Carter, Fitzpatrick, and Katko in the House Transportation and Infrastructure Committee and withdrawn with the consent of Chairman Peter DeFazio, D-Oregon, so it could be perfected. Rep. Titus wanted to cover extend protections to burros and additional work has been done to make it even more workable, and Rep. Cohen wanted to join in with the idea of linking the anti-slaughter provisions with a provision in the bill to forbid use of double-deck trailers to carry horses and burros.

The revised amendment filed must still clear the House Rules Committee in order to secure a vote next week, and that prosect is more likely with a surge in support for the measure. The amendment has picked up additional cosponsors, including Reps. Jan Schakowsky, D-Ill., and Vern Buchanan (the lead authors of the stand-alone anti-horse slaughter bill); Reps. Paul Tonko, D-N.Y., and Andy Barr, R-Ky., (co-chairs of the Congressional Horse Caucus); and Reps. Buddy Carter, R-Ga., Donald Payne, D-N.J. and Guy Reschenthaler, R-Pa. bringing the total cosponsors to 6 Democrats and 6 Republicans. The measure has been endorsed by more than 225 animal and equine groups, orgs., rescues, and businesses in the U.S.

“Our iconic American equines drove commerce and the development of infrastructure in the first 150 years of the republic, and it’s fitting that the INVEST Act pay a debt to them by halting their ruthless exploitation from kill-buyers who cart them off to Canada and Mexico for butchering.” said Marty Irby, executive director at Animal Wellness Action, who was recently honored by Her Majesty, Queen Elizabeth, II for his work to protect horses. “We applaud the Members of Congress who are leading this measure and will continue to bring new and creative solutions to ending the most egregious abuses in the equine world.”

“Rep. Troy Carter was a leader on animal welfare issues in the Louisiana State Senate, and he is picking right back up by leading the amendment to stop the commerce in horses for slaughter,” said Wayne Pacelle, president of the Center for a Humane Economy. “Business and enterprise in our nation must be robust, but it must also be humane. Shedding horse slaughter is good for the economy and character of our nation.”

Horses are revered and cherished in the United States, and 80 percent of Americans oppose the slaughter of horses for human consumption. As public awareness has grown of the inherent cruelty involved in the horse slaughter industry, calls for a federal response have grown louder as the federal Bureau of Land Management (BLM) has been implicated in a suspect adoption plan that is allowing “adopters” to rake in profits by selling horses and burros to slaughter.

Transport of horses for slaughter is unsafe and has caused multiple serious accidents on American highways. The list is long of serious accidents on American highways involving trucks loaded with horses bound for slaughter. Most of these involve horrific injuries to and deaths of horses on the trucks. As recently as October 2020, 14 horses were killed and 11 badly injured when a truck driving the animals to slaughter flipped on a highway in Franklin County, Missouri. Similar accidents have happened over the years, and in most, motorists had to avoid the accident and, in some cases, encountered terrified and injured horses running loose in the lanes of traffic. Similarly, in 2017, a truck belonging to the infamous kill buyers who own one of the nation’s largest horse slaughter holding facilities in Bastrop, Louisiana, was involved in a terrible crash that led to the deaths of 19 horses.

While horse slaughter does not currently occur on U.S. soil due to a de facto ban achieved through the appropriations process, more than 70,000 domestic and wild horses are shipped to Mexico and Canada each year to be slaughtered for human consumption in those countries, Europe, Asia, and other parts of the world.

Stand-alone legislation that would permanently ban both the transportation of slaughter-bound horses and slaughter itself – the SAFE Act – was recently introduced, but despite the passage of a similar bill fifteen years ago, and the majority of House Members cosponsoring the measure in the 116th Congress, enactment of the legislation continues to be an uphill battle due to industrial agriculture interests and pro-slaughter Members of Congress.