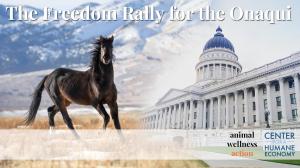 NEW YORK, NY, UNITED STATES, June 18, 2021 /EINPresswire.com/ — Actress and model Katherine Heigl, the star of Netflix’s hit series Firefly Lane, appeared on CNN.com today to discuss the federal Bureau of Land Management’s plan to round up and hold the large majority of the iconic Onaqui wild horses living free on public lands in Utah. She also broadly discussed the BLM’s mismanagement of wild horse and burro populations across other parts of the American West.

Heigl recently joined Animal Wellness Action (AWA), a non-profit 501C-4 lobbying group, and Political Action Committee based in Washington, D.C., and the Center for a Humane Economy (CHE), a 501C-3 non-profit based in Bethesda, MD in their long-running campaign to end the Bureau of Land Management’s (BLM) wild horse and burro eradication plan – known as the “Path Forward” – that the agency began implementing in 2019.

Heigl’s decision to join the campaign comes on the heels of U.S. Secretary of the Interior Deb Haaland’s testimony in a House Appropriations Committee hearing last month that the Dept. of Interior is "in agreement with the plan of the previous Administration," in continuing to eradicate the wild horses and burros on public lands, and a New York Times' recent investigation into alleged adoptions that revealed many of the horses thought to be adopted are actually being funneled straight into the horse slaughter pipeline.

“The horses represent freedom. They represent beauty. They represent strength and courage, and they are not hurting anyone,” said Heigl in the interview. “[We must] really hammer our representatives to stop this because that’s the only way to get their attention.”

“Katherine Heigl is doing the right thing by fighting to protect the Onaqui horses, as well as calling attention to a broader pattern of mismanagement of our nation’s wild horse and burro herds,” said Scott Beckstead, director of campaigns for Animal Wellness Action and the Center for a Humane Economy. “It’s time for the American public to raise its voice and not see this subversion of our federal law to protect these animals.”
The interview can be watched here.

“CNN and Katherine Heigl today reminded Americans about the plight of wild horses and burros,” said Marty Irby, executive director at Animal Wellness Action. “President Biden and Secretary Haaland have a responsibility to take this program off auto-pilot and protect these animals. The federal law to protect these animals was put in place one year before President Biden began serving in the U.S. Senate.”

Heigl will be joined by Animal Wellness Action, Center for a Humane Economy, the Jason Debus Heigl Foundation, Wild Horse Photo Safaris, the Red Birds Trust, and the Cloud Foundation, at the “Wild Horse and Burro Freedom Rally” to be held on Friday, July 2nd, at 10:00 a.m. on the south steps of the Utah State Capitol in Salt Lake City to raise public awareness of the plight of all our nation’s wild horses and burros who are facing an onslaught of BLM helicopter mass roundups in the coming months that will evict thousands of the animals from their home rangelands.

Descended from horses used by pioneers and native tribes in the late 1800’s, the Onaqui horses are known for their robust beauty and their ability to thrive in the harsh environment of the Great Basin Desert of western Utah. They are a favorite among wild horse photographers and enthusiasts and are believed to be the most popular and photographed wild herd in the country. Tourists from all over the country, and even the world, travel to Utah to view and photograph their favorite animals, including stallions with names like Charger, Goliath, Buck, Moondrinker, with glimpses of the herd’s elder statesman, Gandalf (also known as “Old Man” by some), being the most coveted prize.

"Big Beef" interests like the National Cattlemen's Beef Association (NCBA) want nothing more than to eradicate the wild equids on the range so they can utilize the lands to graze cattle on the taxpayer's dime, paying little more than a few bucks a year for grazing permits. In April, AWA and CHE were joined by more than 70 groups in a letter to Secretary Deb Haaland calling for a freeze on grazing permits. There's been no response from Haaland despite the media contacting the Secretary's Office and the White House who declined to comment.

In light of the DOI and White House’s lack of comment and response on the subject, the same coalition, led by AWA and CHE, sent a second letter in May signed by more than 1,200 groups, organizations, businesses, horse rescues, and advocates to President Joe Biden pleading for the President to immediately halt the roundups.

Earlier this week, at the urging of AWA and CHE, U.S. Reps. Troy Carter, D-La., Brian Fitzpatrick, R-Pa., and John Katko, R-N.Y. introduced an amendment to President Biden’s signature transportation and infrastructure package, the INVEST Act, that would ban the transport of both wild and domestic horses to slaughter – supported by more than 220 groups, businesses, organizations, and rescues. The measure is still being considered by House Transportation Committee Chairman Peter DeFazio, D-Ore., and the groups are hopeful it will be included in the final bill.

Advocates and other interested parties willing to join Heigl in the campaign to save the wild horses and burros can find more information at www.SaveTheOnaqui.org or email action@animalwellnessaction.org.