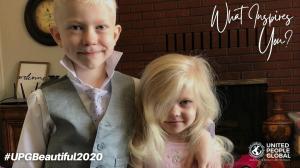 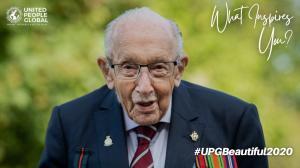 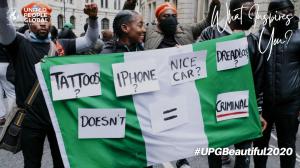 UPG Beautiful reminds us that everyone has the power to make our world a better place. From children, to the elderly, to entire nation states.”
— Yemi Babington-Ashaye. President, United People Global

GENEVA, SWITZERLAND, May 7, 2021 /EINPresswire.com/ — United People Global (UPG) publishes “UPG Beautiful 2020”, a selection of the Top 9 things that happened that made the world more beautiful. The series celebrates the most beautiful things that happened during the year across the globe. #UPGBeautiful2020.

Even though 2020 proved to be a devastating year, there were moments, stories and developments that made the world #beautiful​. At UPG, we believe it is important to appreciate these moments to guide our path and to help us make our world a better place with our own contributions, no matter how big or small.

On this international United Nations Day that marks a Time of Remembrance and Reconciliation for Those Who Lost Their Lives During the Second World War, UPG joins hands to honour their memory. And to honour all those whose actions give us reason to find a silver lining in every cloud.

The Top 9 selection includes things show exemplary courage, kindness, resilience, collaboration and love. Some of these acts were done by people that range from a 6-year old to a 99-year old. The actions also include acts done by working professionals, retired individuals, ordinary people working together, researchers and scientists working together, international organisations and entire nation states.

And the countries highlighted in this publication include actions from: United Kingdom, Switzerland, United States of America and Nigeria. One action that is highlighted also features actions from multiple countries around the world including China, Russia and more.

“UPG Beautiful reminds us that everyone has the power to make our world a better place. From children, to the elderly, to entire nation states. We celebrate these inspirational actions and we hope that we can work together to make the world more beautiful.” said Yemi Babington-Ashaye, President at United People Global.

The UPG Team makes the final editorial decision after listening to a wide range of inspirational and beautiful events from a diverse team of Global Contributors who reflect on what deserves to make the list. This year, contributions also came from UPG Champions, individuals and organisations who make a special commitment to making the world a better place.

#UPGBeautiful2020 can be watched here: https://upglive.org/UPGBeautiful2020. It is is live on Saturday, 8 May 2021 at 2pm CEST Geneva time. This year’s selection highlights:

1 – Human resilience during the COVID-19 pandemic: The world was hit by one of the worst pandemics bringing chaos to the economy, health, and well-being of countries around the world, however, we also witnessed the best of humanity as we helped one another get through these trying times.

3 – Goodwill Vows: A platform that enables people and organisations to register a donation now or in the future to any cause they care about, a donation is conditional on an event happening to them or simply the passage of time.

4 – Bridger Walker: An American 6-year-old who saved his 4-year-old sister from a charging dog attack

5 – Black Lives Matter Movement: A global movement that was accelerated by the death of George Floyd due to police brutality.

6 – #EndSARS: A movement that started after footage surfaced of police brutality from the Special Anti-Robbery Squad (SARS) in Nigeria. The protests demonstrated solidarity, organisation and accountability from the Nigerian people, as well as the important role of women.

7 – US 2020 Election Turnout and Kamala Harris: Ordinary people in America came out in record numbers, from all parts of the political spectrum. And the first woman and first person of African and South Asian origin was elected to the office of Vice President of the USA.

8 – COVID-19 vaccines. The record development and approval of vaccines in response to the pandemic as a result of global cooperation.

9 – The Empowered People Index (EPI). A measure of the ability of people in a society to determine their future. This metric will help guide people about what to do to increase the voice and the power of ordinary citizens in their societies.

About United People Global: UPG is a community that encourages and enables people to make the world a better place. The work of this global community is facilitated by United People Global Foundation, an independent not-for-profit organisation based in Geneva, Switzerland. UPG is not a political or religious organisation. More information: https://unitedpeople.global/about-us/.

#UPGBeautiful2020​ – Nine Things That Made The World More Beautiful in 2020