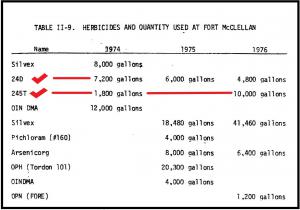 The agent orange usage list at Fort McClellan along with other herbicides. Taken from the 1990 Army Corps Of Engineers site review of McClellan. 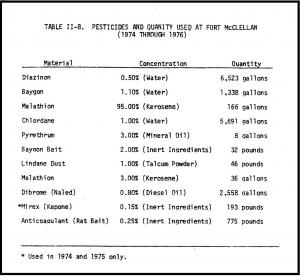 The pesticides usage list for the same 3 year period as agent orange at Fort McClellan. Taken from the 1990 Army Corps of Engineers site review. 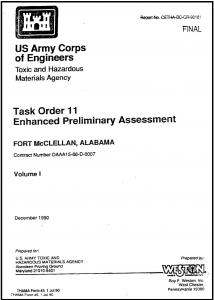 ALBANY, NEW YORK, USA, May 7, 2021 /EINPresswire.com/ — During the primary years of the Vietnam War, the herbicide chemical known as agent orange was pre-mixed at Dow Chemical factories and then shipped overseas to the jungles of U.S. combat zones. The compound could also be made on site at any location by simply buying the separate chemical ingredients for it. The main ingredients for agent orange are known as 2,4-D and 2,4,5-T. As the years have passed, veterans everywhere have learned how to screen old military environmental reports for any mention of the dreaded chemicals.

After conducting sweeping internet searches to find the environmental report history for the former federalized Army base known as Fort McClellan, Alabama, the veterans who were stationed there have identified ten significant toxic spill sources that makes up their current health risk profile. One of the ten hazardous sources on their list, is the collection of papers verifying the use of 2,4-D and 2,4,5-T chemicals along with hundreds of pounds of other herbicide and pesticide products that were all used during the same three-year period at the base. They say that the mixtures of these products, when placed alongside all other known multiple spill sources that took place during the same range of years, forms the likelihood of a cumulative cause to their health conditions.

The collection of papers was first brought to the attention of the former congressional staffers for Senator Johnny Isakson of Georgia who was the chairman of the Senate Veterans Committee at the time. When he suddenly left Congress, the papers and issues of the veterans were rolled over to the staffers for Senator Jerry Moran. When the majority flipped in the Senate, the veteran’s issues and papers were rolled over to the staffers for Senator Jon Tester. To this very minute, the issue of agent orange used at Fort McClellan remains unprocessed, neglected, abandoned, unresolved, and largely ignored by Tester’s office and the current Senate Veterans Committee. All the men have no military service.

The Government Accountability Office (GAO) has published an official site list of all United States military locations where agent orange was used or stored during the Vietnam War years and thereafter. Fort McClellan is not on the list. The Dept. of Veterans Affairs has been deferring to the GAO version of the list in their processing of veteran’s disability claims. In order to have the base added to the GAO list, then an authorization letter has to be issued by a Veterans Committee or some other member of Congress to commence a new report showing the site changes. The veterans have done the preliminary work with the committee staffers to set up the boundary of questions that was to be probed or answered by the new report. The agent orange matter is included in their range of proposed topics. But the delivery of an authorization letter to start the report sits dormant at the hands of Senator Jon Tester of Montana.

At the end of February 2021, the activist for the veteran’s group, Sue Frasier, received a phone call meeting with a resigning staffer from Senator Tester’s office alleging that he was issuing a letter to the GAO that very week. The letter was to see if they would voluntarily add the new Fort McClellan site information for agent orange storage and use. Since that time, there has been no reply from any new staffers from Tester’s office either to verify the letter was sent or to speak on the matter of them issuing the other authorization letter for the entire new report. Veteran’s disability cases at the VA are languishing in limbo or are falsely denied by clerical raters based on the missing site information at the GAO and VA. Some of the effected veterans are medically matching to the “presumptive” diseases that are listed for other groups who are claiming agent orange exposures, but they are getting denied by the VA because of the GAO locations technicality.

The veterans have been frustrated and outraged by the lack of urgency and attention from Tester’s office. The patient group says that Senator Tester has been advancing the issues of other toxic exposure groups at the committee who are not holding the level of certainty for toxic site papers and matching published health sciences to the extent that they are. They consider the obstructionism that has come so far from Tester, Moran, and Isakson as the product of civilian incompetence. The veterans have long complained that the Senate Veterans Committee has been used as a deceptive platform for political and news media exploitation rather than a fair and equal oversight and legislative process available to all veteran’s patient groups. According to them, the committee works from a charade agenda where only certain patient groups are helped with the full package of hearing and news media grandstanding, while at the very same time, other groups who are better documented in their causes are blocked or held in perpetual limbo and concealment.

The veterans have recently made a consulting connection with offices at the Environmental Protection Agency regarding their overall cause stemming from Fort McClellan service. But they also insist that a new GAO Office change still must be made to establish the base as a former agent orange usage site. AO disability claims stemming from service at McClellan will not likely be resolved by any expert assistance that may come from the Environmental Protection Agency. The veterans are hoping that the dislodging of one assistance venue will also leverage the dislodging of the GAO report project in their favor.
+
+
UPDATE TO THE APRIL 20, 2021 STORY ABOUT THE NUCLEAR REGULATORY COMMISSION: A meeting has been held between the veteran’s group and the Nuclear Regulatory Commission. It was revealed at that time that NRC inspectors had tried a few times to gain access to the Chemical Corps environmental papers for Fort McClellan but were denied access under the excuse it was classified. The NRC was helpful & assisting to the veterans group.
+
+