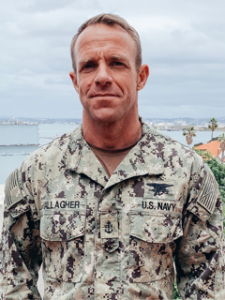 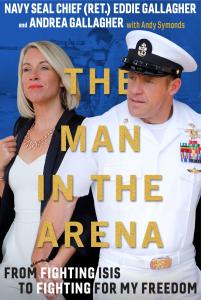 The Man In The Arena by Eddie & Andrea Gallagher

The media continually twists sound bites to fit their agenda. The book will be the first opportunity for the public to hear the full and true story of what really happened.”
— Navy SEAL Chief (Ret.) Eddie Gallagher

"Much has been made of Eddie Gallagher’s recent statements on the Apple podcast, The Line. The truth is that the story has always been there, but hidden just beneath the surface, such that the mainstream media completely missed it until Eddie stated it in the most clear and unambiguous terms.

On May 3, 2017, Chief Gallagher and his platoon intended to kill this terrorist – along with 49 other members of ISIS who were holed up in a compound. Alpha platoon took action calling in hellfire missiles on their position & successfully eliminated the 49 members of ISIS with the government approved hellfire missile strike leaving one sole survivor.

The confirmed ISIS terrorist was brought to the platoon and, after a quick evaluation, it became clear that he was beyond saving.

The members of the platoon then agreed to perform medical procedures on the terrorist until he succumbed to his blast wounds for training purposes. These procedures were not intended to cause or hasten his death and, if anything, kept him alive for a few minutes longer than he would have lasted if no procedures were applied.

Eddie’s treatment in particular, performing a cricothyrotomy, opened the terrorist’s airway, which by all accounts, including video evidence, was very labored. According to the testimony of Corey Scott, that breathing had improved significantly after Eddie finished.

All of this was known to prosecutors at the time of the trial, but they chose not to make it a part of their presentation because it didn’t fit with their false stabbing narrative. Eddie’s legal team raised these issues with the judge in a May 26th motion to dismiss and it was reported on at the time by the Navy Times in 2019.

There were also several references to this in the trial, as no MEDEVAC helicopter was ever requested (nor would it have been approved), which would have been the next required step of treatment, had saving the terrorist’s life been possible."

“This is why I wrote the book,” Chief Gallagher says about his forthcoming tell-all, “The media continually twists sound bites to fit their agenda. The book will be the first opportunity for the public to hear the full and true story of what really happened in Mosul. I think a lot of minds will be changed.”

The Man in the Arena: From Fighting ISIS to Fighting for My Freedom, from Ballast Books, releases on June 29, 2021 and is available for pre-order everywhere books are sold.