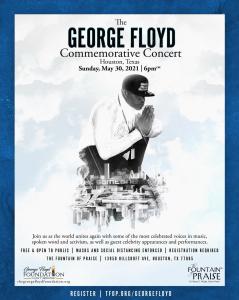 We could not have predicted, that George Floyd's killing by police would inspire a
year of worldwide protests, unifying people of all nationalities to end systemic racism and police brutality.”
— Shareeduh Tate, President of The George Floyd Foundation

HOUSTON, TEXAS, UNITED STATES, May 7, 2021 /EINPresswire.com/ — The George Floyd Foundation (GFF) announced today that they will host a George Floyd Commemorative Concert on Sunday, May 30, 2021 in Houston, Texas. The event will take place at the Fountain of Praise Church where George Floyd’s funeral was held before he was taken to his final resting place in Pearland. The all white affair will commemorate the one-year marking of George Floyd’s tragic death and serve as a reminder of the continued fight for #JusticeforGeorge (9:29) and so many others that have lost their lives unjustly, #SayTheirNames. There will also be a week of events in Minneapolis to mark the anniversary and it will culminate with this finale celebration in Houston on the 30th. Guests and virtual participants will include; Members of George Floyd’s family, friends, VIP’s, celebrities, political and community leaders and supporters representing various parts of the world.

“We could not have predicted, that George Floyd, whose killing by police would inspire a year of worldwide protests, unifying people of all nationalities, calling for an end to systemic racism and police brutality. A year later, his injustice has continued to shake the nation and the world and it is our intention that the sacrifice of his life, is not in vain and does result in justice, saving other lives and ultimately change the world” says Shareeduh Tate, President of The George Floyd Foundation and George’s 1st cousin.

About GFF
The George Floyd Foundation (GFF) was founded by the family of George Floyd as a response to the brutal murder of George Floyd that occurred for 9 minutes and 29 seconds, by the hands of the Minnesota Police Department. Georges ‘I can’t breathe’ plea for his life was a cry heard around the world. The GFF is dedicated to ensuring that Georges plea never goes unanswered, that Georges voice is never again silenced and that the community is served by achieving greater access to social justice education and advocacy, youth services and workforce development programs to assist with relieving the burden of inequality and injustice.

The mission of the George Floyd Foundation is to create social justice equality and equity opportunities in the areas of social justice education and advocacy, youth services and workforce development. Website: https://www.thegeorgefloydfoundation.org

Though George Floyd's voice was TAKEN from him…
WE WILL NOT BE SILENT.  #JUSTICEFORGEORGE