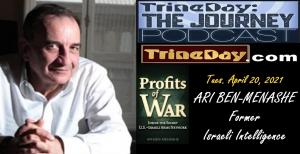 WALTERVILLE, OR, US, April 19, 2021 /EINPresswire.com/ — Ari Ben-Menashe, former Israeli intelligence official, on TrineDay: The Journey Podcast (#38 at trineday dot com, April 20, 2021), says that the Jeffrey Epstein story was most interesting because it was about “honey trapping a president of the United States and changing [the] foreign policy of the United States.”

Ben-Menashe says that, when Bill Clinton got elected, “the Israelis got really worried that they have another Jimmy Carter on their hands, which would force them to do a peace deal that they don’t want to do, like Jimmy Carter forced them to do the deal with Egypt when they didn’t really want to do that deal. That’s where Epstein came in and became a very powerful force. He brought Clinton under Israeli control by the honey traps that he did with him. That was the main issue with Epstein. That was what made the Epstein story so compelling. It was about honey trapping a president of the United States and changing foreign policy of the United States.”

Jeffrey Epstein, financier and sex offender, socialized with Bill Clinton, Donald Trump, and England’s Prince Andrew, among other high-profile people, and was arrested in July 2019 and charged with sex trafficking and conspiracy to engage in sex trafficking. He died in jail while awaiting trial. His death was ruled a suicide.

Ari Ben-Menashe spent more than a decade in the innermost circles of Israeli intelligence and oversaw the accumulation of hundreds of millions of dollars in CIA and Israeli intelligence slush funds. He wrote “PROFITS OF WAR: Inside the Secret U.S.-Israeli Arms Network,” about the secret negotiations with the Iranians to delay the release of the American hostages until after the election of Ronald Reagan in 1980, enlisting Robert Gates in the transfer of the $52 million payoff to Iran, brokering secret Israeli arms sales on four continents, and briefing George Bush on the vast arms network.

After watching “his masters” sponsor monstrous terrorist acts in the name of a higher good and questioning the immorality around him, Ben-Menashe was cut off and set up. At his trial, he told the truth and was acquitted.

About TrineDay: TrineDay is a small publishing house that arose as a response to the consistent refusal of the corporate press to publish many interesting, well-researched and well-written books with but one key “defect”: a challenge to official history that would tend to rock the boat of America’s corporate “culture.” TrineDay believes in our Constitution and our common right of Free Speech.