“The ‘Real’ Criminals of Nevada” 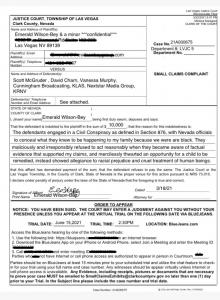 "I filed a lawsuit against a white man, charging him as Public Nuisance for coming into my apartment, afterwards I was evicted as a Nuisance, twice!"

"Aaron Ford might be the Attorney General, but he is not pulling the strings, have you noticed there is not a single African American Civil Rights attorney in Nevada? Not one lawyer to help? Why?”
— Emerald Wilson-Bey

In the book she discloses how she decided to contact reporters Vanessa Murphy, David Charn, Scott McGruder and Dana Gentry about the suspicious evictions, the not being able to use the amenities, and other discriminatory events that occurred. Reporter Vanessa Murphy emailed her back "we don't cover stuff like that", a direct contradiction according to Murphy's last discrimination story, the only difference is the woman was "white" Emerald shares in chapter five of the memoir. Unable to find representation in the state, Emerald has since filed small claims lawsuits against all the reporters who refused to help her. She also attempted similar pro se lawsuits against each government agency and in an blatant civil rights and constitutional rights violation, her suits were illegally deleted from the court system and the fees refunded back to her, for a total of nine times. An action she says was done to "keep what's going on quiet". In chapter ten she describes how she reached out to Tyler Technologies, the creators of the e-filing system and asked them to "enforce their terms of use", citing the deletions of her lawsuits by Las Vegas Justice Court to protect government officials were unconstitutional and the tech company refused to budge, so she sued them too for $25. In an effort to bring attention to the situation and help someone else that might be a victim of the city's corruption, she spent the last several months writing a diary and collecting evidence, that she has now converted to the infamous book, the book will include standard text, but also over 100 images of corroborative evidence to support each allegation, due out April 30th! Uniquely the foreword reads: "Pro Hac Vice" representation wanted, offering handsome pay!". Pre-order today!