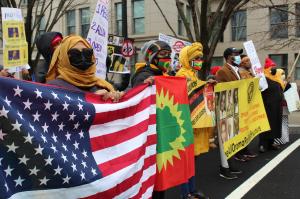 FALLS CHURCH, VIRGINIA, UNITED STATES, February 22, 2021 /EINPresswire.com/ — As part of its ‘Hunger Strike Awareness Campaign,’ the Oromo Legacy, Leadership, and Advocacy Association (OLLAA) led a rally that marched through the streets of Washington, D.C. to the U.S. State Department Headquarters in Northwest Washington, D.C., to call attention to the plights of Oromo political prisoners currently on hunger strike. OLLAA leaders delivered a message to Secretary Antony Blinken, the U.S. Secretary of State, and Ambassador Robert F. Godec, the Acting Assistant Secretary of the State Department’s Bureau of African Affairs, calling on them to act immediately to save the lives of Oromo political leaders currently on hunger strike.

Since June 2020, the Ethiopian government has held the political prisoners inside a maximum-security prison in Addis Ababa. The prisoners, including opposition leaders Jawar Mohammed and Bekele Gerba, have been on hunger strike for three weeks and there is growing fear about their health.

OLLAA, in partnership with the larger Oromo community in the Washington, D.C. area, is holding a second rally to further push the U.S. State Department to act. According to Seenaa Jimjimo, OLLAA Executive Director, “OLLAA is mobilizing the entire Oromo community, throughout the United States, to again pressure the State Department to intervene and save the lives of Jawar Mohammed, Bekele Gerba, and the other Oromo political leaders currently on hunger strike. We call upon the Biden Administration to put aside words of support and to act to save the lives of these political prisoners.”

The second OLLAA rally and march to the State Department is scheduled for February 25, 2021. For more information about the rally, please visit www.ollaa.org.

For all inquiries relating to this press release, please contact: