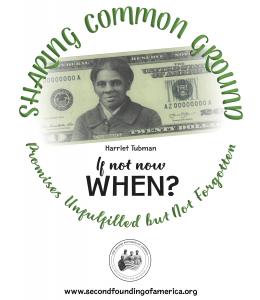 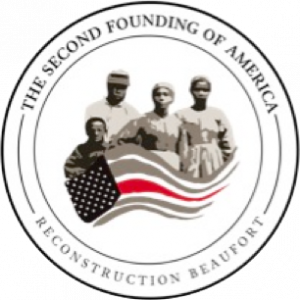 BEAUFORT, SOUTH CAROLINA, USA, January 26, 2021 /EINPresswire.com/ — The “Second Founding of America” launched a petition drive that “implores” the Biden-Harris administration to fulfill the promise to the Nation that Harriet Tubman’s portrait be placed on the $20 bill in recognition for her heroism during and after the Civil War.

Under direction from the Obama–Biden administration, Treasury Secretary Jack Lew initiated the design of the new $20 bill that was intended to be put into circulation in 2020.
The work was not completed before the end of the Obama–Biden administration, and Treasury Secretary Steven Mnuchin, under President Trump, postponed design and circulation effectively canceling the former President’s order.

“As the nation struggles to end ugly divides, eradicate racism and level the playing field for all Americans, it is important that we recognize all American heroes and not just a few white men,” said former Beaufort, SC Mayor Billy Keyserling who is the founder and interim director of “The Second Founding of America”, a non-profit initiative whose mission is to unbury the hidden stories of the Reconstruction era.

“Mythmakers have been hiding the many accomplishments of black patriots, many formerly enslaved Africans, perpetuating the story of the Civil War and Reconstruction as the Lost Cause,” according to Michael Allen, retired National Park Service professional who serves as Chair of the Second Founding of America Advisory Board. “The fact is that during the Reconstruction era, many black and brown people achieved success, not the least of which were the 13th, 14th, and 15th Amendments to the Constitution granting Freedom, Citizenship and the right for men to vote, establishing schools for freemen, many traditionally black colleges and universities, serving in public office, starting successful businesses . . . . until the Union troops were withdrawn, and the stories of success hidden,” Allen said.

Tubman, formerly enslaved, upon achieving her own freedom returned South where she often worked out of Beaufort, SC as a nurse, as a businessperson creating jobs for women, and as a spy, organizer, and warrior on the Union side. She is best known as the conductor of the Underground Railroad and for masterminding the Combahee River Raid in June 1863 that freed hundreds of enslaved Africans.

"Historic preservation is the first step toward social justice, and the South Carolina African Heritage Commission believes a portrait of Harriet Tubman on the $20 bill preserves a story of our past that is untold and unappreciated," said Jannie Harriot, Chairlady. "We support the appeal to reconsider her portrait and hope the Biden-Harris administration can fit it in their priorities."

The petition is being circulated through social media and we are encouraging it to become viral through the participation of individuals and organizations across the US. To sign the petition one should go to https://www.secondfoundingofamerica.org/sign-our-petition

The Second Founding of America, is an expansive national collaboration of scholars, educators, public officials, visual and performing artists, and community leaders whose common purpose was to establish the Reconstruction Era National Historical Park and now to uncover and teach the untold stories, and correct the mistold stories, of the Reconstruction Era during and the following the Civil War.

Through collaborative efforts with the National Park Service and other Reconstruction related initiatives, it is a work of extraordinary scale but one that promises fresh insights into American History that can give us a greater understanding of our past and our present so we can create a better future by fulfilling the yet to be achieved promises of freedom, equality, and justice for all.

III. “Finding and Sharing Common Ground” – Grassroots campaign, that identifies untold stories, leverages stories of Reconstruction and the Reconstruction Era National Historical Park & Network into community conversations about diversity, equality and justice and an end to racism in America while encouraging policymakers to integrate Reconstruction History taught in our schools.

Billy Keyserling
The Second Founding of America
+1 843-592-0400
email us here
Visit us on social media:
Facebook