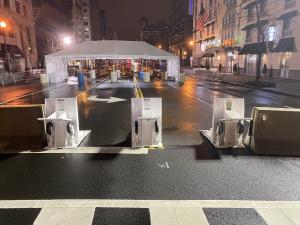 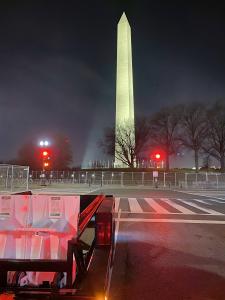 Archer 1200 barriers arrive for deployment at the inauguration.

It was a tremendous partnership that we created to secure such an important event as this year's inauguration.”
— Meridian CEO Peter Whitford

WASHINGTON, DC, UNITED STATES, January 21, 2021 /EINPresswire.com/ — When tens of thousands of troops secured the streets of Washington, D.C., Meridian Rapid Defense Group was chosen to be part of the operation to ensure the security of an inauguration like no other.

Meridian’s mobile Archer 1200 barriers, with full ballistic capability, played a unique role in an operation that turned the streets around the Capitol into a near fortress. Meridian worked alongside global security firm Checkmate Global which specializes in hard perimeter security assets.

Peter Whitford, CEO of Meridian Rapid Defense Group said, “We are partnering with Checkmate to ensure that our deployments are done to the strict standards of the Department of Homeland Security and the SAFETY Act.”

The barricades varied throughout the city and along the Mall, ranging from the smaller Archer metal barriers to tall metal fencing reinforced with heavy concrete blocks.

Checkmate was looking for a solution that was mobile and didn’t require heavy equipment to move, and one that was SAFETY Act certified. The Archer barriers allowed them the flexibility to get people and vehicles in and out without disruption.

“Every security product has its own use. Our barriers were used to allow for pedestrian traffic and at the same time close down and open roads when needed at the different access points,” said Mr. Whitford.

In a video statement, Acting Attorney General Jeffrey Rosen said, “Every level of law enforcement and the National Guard worked around the clock to provide the highest level of safety and security on Inauguration Day.”

A raging pandemic forced most inaugural events online, and the January 6 riot at the U.S. Capitol, which left five people dead, prompted the heightened security.

The U.S. Secret Service was in charge of what the government calls a National Special Security Event, a designation for high-risk gatherings like the major sports events after 9/11 and political conventions that may be the target of domestic or international terrorism. These events receive Special Event Assessment Ratings (SEAR) and are characterized by a coordinated security collaboration between the USSS, Department of Homeland Security, and FBI.

“While we work hard every day to ensure safety at events ranging from farmer's markets to COVID vaccination sites,” said Mr. Whitford, "participation in SEAR-I events like the Super Bowl and Tournament of Roses Parade have enabled us to demonstrate our vehicle mitigation expertise."

“It was a tremendous partnership that we created to secure such an important event as this year's inauguration,” he said