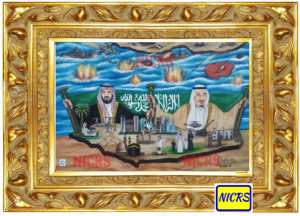 This Artwork is speaking out of a period of time in history that this painting recorded it forever,
read the history book with one quick look

For the first time in History, NIC has created a new exceptional artistic innovation, it is a new kind of Fine Art, already favored by museums and Heads of States around the World for recording the Works and Achievements of Kings, Princes, Presidents (Heads of State) and Prominent Figures for displaying the Achievements of Head of States, expressing the Situation and Issues important to the country from past and present. This kind of painting is the new visible history book, it can be read with one quick look. These Paintings will be preserved in the country's History and Culture, many Head of States prefer adding sections in State museums in which their Achievements are displayed to stay in history forever.

NIC, the only company specialized in Painting the Achievements of Heads of States around the world has confirmed that several artistic paintings of the country’s Heads of States Achievements have been painted for the United States of America, and other countries Worldwide.

NATIONAL INVESTMENT CENTER, INC, an American commercial company registered with the Ohio Country Registry. The company was incorporated on June 13, 1996, and the corporate headquarters are in Toledo, Ohio,