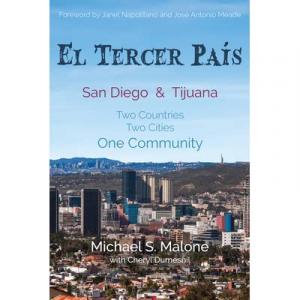 SILICON VALLEY, CALIFORNIA, UNITED STATES , January 12, 2021 /EINPresswire.com/ — As President Trump heads to Texas to highlight his signature border wall, a campaign promise of 2016, a new book about the San Diego-Tijuana experience undercuts his assertions about the wall’s necessity for national and economic security.

In stark contrast to the current administration's divisive approach, the decades-long goal in San Diego and Tijuana has been to let people flow back and forth between the two nations under a system of binational collaborations that have resulted in camaraderie and commerce for the region. Instead of fear, distrust and isolation, a dynamic new community has arisen.

El Tercer Pais, or “The Third Country,” by noted Silicon Valley author Michael S. Malone, tells the story of the historical, political, economic and cultural forces that helped create what has been called “the most dynamic cross-border community in the world.” In the pre-pandemic world, tens of thousands of U.S. and Mexican citizens legally crossed the border each day to work, go to school, get medical care, eat, drink and socialize in one another’s country, bringing the unique, hybrid community to life. (Under agreements with Mexico and Canada, the Department of Homeland Security has placed limits on non-essential travel across the border under COVID-19.)

Malone’s book highlights what few Americans know. Tijuana is today a metropolis of 2 million people, a center of manufacturing, engineering and technology, with a highly-skilled workforce. (By contrast, San Diego, California’s second-largest city, has 1.4 million). Samsung television and Toyota Tacoma trucks for North America are built here, along with delicate medical equipment and sophisticated car stereos in factories with AI and other technology. Prosperous Mexicans shop at the Las Americas Outlets mall on the U.S. side because, contrary to popular notion, high-end retail goods are cheaper there than in Tijuana. What was once an unpredictable and chaotic hours-long border crossing now takes a matter of minutes, thanks to special lanes that allow drivers with Global Entry and SENTRI (Secure Electronic Network for Travelers Rapid Inspection) cards to zip over the border, as do “FastLanes” for medical patients and others bearing FastPasses. Smaller businesses often have offices in each city, or as they refer to it, “the other side of town.”

It was visionary business, academic, government and community leaders who forged the binational partnerships during the past few decades that have resulted in this dynamic new regional metropolis. Their efforts are vividly depicted in El Tercer Pais. The book also provides evidence that with a free flow of ideas, cross-cultural cooperation, and collaborative border management, a prosperous and creative “third country” can arise — and that border walls just might be irrelevant.

Malone is available for interviews.

Michael S. Malone is one of the world’s best-known technology/business journalists. He is the author of 25 books, including such award-winning works as The HP Way, The Intel Trinity, and The Virtual Corporation. He wrote the “Silicon Insider” column for ABC News from 2000-2009. He has also been the host or producer of several public-television series (notably the award-winning PBS miniseries The New Heroes, hosted by Robert Redford), editor of Forbes ASAP magazine, and is Dean’s Executive Professor at Santa Clara University. He is a Distinguished Friend of Oxford University. Malone lives with his wife and younger son in Sunnyvale, California.