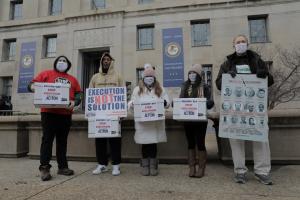 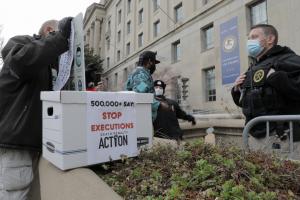 The group will hand deliver petitions to the Department of Justice.

WASHINGTON, D.C., USA, January 8, 2021 /EINPresswire.com/ — Following a brief press conference at 10 a.m. on January 8, 2021 outside the Department of Justice (corner of Pennsylvania Ave NW and 9th NW in Washington, D.C.), the national anti-death penalty group Death Penalty Action will hand deliver boxes filled with over half a million petition signatures to acting Attorney General Jeffrey Rosen and President Donald Trump, demanding a hard stop to all federal executions. Three federal executions will take place during Trump’s final full week in office unless clemency is granted by the president, the execution warrants are rescinded by the acting Attorney General, or a stay is put in place by the courts. The Death Penalty Action petition for Dustin Higgs, also delivered today, has garnered over 400,000 signatures. Other petitions for Mr. Higgs have over 1,000,000 signatures.

Trump’s unprecedented execution spree continues on January 12 with the scheduled execution of Lisa Montgomery, a woman with debilitating severe mental illness. On January 14, Cory Johnson, a Black man with intellectual disability may be executed. Dustin Higgs is slated to be executed on January 15, possibly the final federal execution ever conducted in the United States. Mr. Higgs’ execution is scheduled just five days shy of President-elect Joe Biden’s inauguration.

“This is exactly what we mean when we say the death penalty is arbitrary. But for just a few days, we wouldn’t be having this conversation because Biden pledged to abolish the federal death penalty,” said Abe Bonowitz, director of Death Penalty Action. “And beyond that, the audacity of the Trump administration to conduct a legal lynching of a Black man on Martin Luther King Jr.’s birthday is unfathomable. It is undisputed that Dustin Higgs’ co-defendant is the actual killer, and he received a life sentence. Yet our government insists on murdering Dustin Higgs. This is why we are working to support legislation being introduced in Congress in the coming days to abolish the federal and military death penalty laws in the first 100 days of the new administration.”

The family of Dustin Higgs has organized rallies at Freedom Plaza near the White House at noon on January 8, and at 2 p.m. on January 9 at the U.S. Supreme Court. Dustin Higgs’ daughter, Tierra Darby, has been passionately trying to save her father’s life.

“We need to get the word out about my father’s case,” said Darby. “I’m praying that President Trump and acting Attorney General Rosen listen to us.”

In addition to the petitions, several sign-on letters by faith leaders will be presented. Jewish faith leaders call on the acting Attorney General to rescind the execution warrants as a matter of public safety and concern for government workers involved in the executions, their families and the communities where they live.

“What rises to the surface is COVID-19,” states the petition. “Federal executions are superspreaders for the pandemic, impacting prison workers, their families, and their communities. If for no other reason, these executions must be put on hold and left to the next administration to deal with.”

Concurrent with the petition delivery and rallies, Death Penalty Action is planning a robust virtual presence for the next week of executions. “The End of Executions” virtual conference begins Sunday, January 10 and will include virtual vigils streamed live from the prison at Terre Haute, IN on January 12, 14 and 15. The text of the Dustin Higgs petition is available here and the text of the other petitions can be seen here.