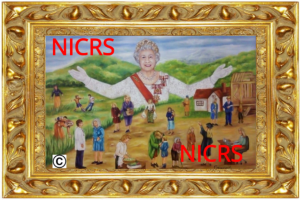 Honoring Her Majesty, The Queen Elizabeth II as MOTHER of ALL

Kings, Princesses and Presidents prefer adding sections of their country’s museums in which their achievements are displayed

TOLEDO, OHIO, UNITED STATES, January 6, 2021 /EINPresswire.com/ — NATIONAL INVESTMENT CENTER, INC, an American company, for the first time in history NIC has created a new exceptional artistic innovation, new kind of fine art, it was favored by museums and heads of states around the world for recording the works and achievements of kings, princes, heads of State and prominent personalities for displaying their achievements and expressing the positions of the countries and important issues from past and present. These paintings preserve the history and culture of the country forever and many head of States prefer now to display their achievements in museums. NIC, the only company specialized in Painting the achievements of heads of country around the world has confirmed that several artistic paintings of the country’s heads of States such as the United States of America and other countries in the world have been painted, Royal Services department at National Investment Center in Ohio, U.S.A. created the first international fine art oil painting, titled MOTHER OF ALL showing her Majesty the Queen Elizabeth II in the painting and honoring her as MOTHER Queen (by artist François Maurice ) and all what she always did to help all mothers and families in the United Kingdom.

Displaying this valuable painting in museums will contribute to displaying her achievements and the consolidation of the United Kingdom‘s culture in current and future generations. her work and achievements were included in the painting to remain as a guide and part of the history and culture of the United Kingdom. NATIONAL INVESTMENT CENTER, INC, an American commercial company registered with the Ohio Country Registry. The company was incorporated on June 13, 1996, and the corporate headquarters are in Toledo, Ohio,

Other example of this rare type of fine art: a new Painting titled:
His Majesty King Salman and His Highness Crown Prince Mohammed bin Salman protecting the Kingdom of Saudi Arabia by artist François Maurice.