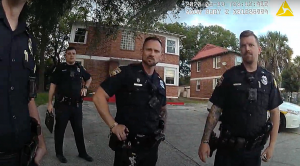 Brittany Chrishawn Williams, who was brutalized after police trespassed on her property, releases body cam footage that appears to be tampered with

JACKSONVILLE, FLORIDA, USA, December 30, 2020 /EINPresswire.com/ — Brittany Chrishawn (Williams), the award-winning police brutality filmmaker who was allegedly brutalized by police and left with broken teeth and damaged nerves, has publicly released the body camera footage. This footage appears to expose the officers conspiring against her and parts of the footage released by prosecutor Richard Giglio has apparently been muted out. The alleged edited sections are the exact moments Brittany says she described in her affidavit of facts in May 2020. Brittany wrote that she heard the officers conspiring against her and joking about being able to get away with illegal acts. Brittany now faces up to ten years in prison for charges that she says have been wrongfully conspired against her. And the body camera footage she released suggests the validity of her claims.

“Ms. Williams is a college graduate, a property owner, and has no prior criminal history whatsoever. Based on the facts and evidence known to us at this time, Ms. Williams never committed any crime on May 13, 2020. After reviewing the videos from the officers' body-worn cameras, we do not understand why the State Attorney’s Office filed criminal charges against Ms. Williams…” says Brittany’s attorney Jeff Chuckwuma “…what we know for certain, is that the actions and conduct of the Jacksonville Sheriff’s Office on May 13, 2020 were unlawful, unjustified, and completely unacceptable. Law abiding citizens who are exercising their constitutional rights should not have to fear being harassed or harmed by the people who are supposed to protect them.”

The body camera footage shows officer A. Carmona #64386 parked in Brittany’s driveway. His supervisor, D.P. Jadlocki #63949, asks a few times why he parked in Brittany’s private driveway, because there are many other open lots on that street. There’s a large, vacant lot that the police usually park in which sits only feet away from Brittany’s driveway. There’s also a gas station right across the street from Brittany’s house where Carmona could’ve parked. The supervisor goes on to accuse Carmona of having a sexual relationship with Brittany.

The footage also shows officer C. Padgett #74181 slamming Brittany’s face into the floor of her home after entering without a warrant; particles of Brittany’s teeth appear to be on the floor after his attack. Padgett then slams Brittany’s face again into the bars of his police car. But, he tells the supervisor that Brittany ran into the door of her home breaking her own teeth. In addition, Padgett claims he was kicked by Brittany; but his body cam catches an eye-witness across the street saying “She didn’t kick you.”

In the footage, Carmona alleges that Brittany Chrishawn Williams initiated the incident by walking outside and immediately yelling and throwing a plastic spoon that hit him in the forearm while seated in his vehicle. But the police report says she approached his car and asked if she could help him. There’s no evidence of Brittany throwing a spoon and hitting Camona, and he later contradicts himself on camera by stating that Brittany initially walked up to ask if she could help him. Also, the footage filmed by Brittany’s husband, Ausar Moore, shows officer Carmona collecting a spoon from outside of his vehicle rather than inside of the vehicle where he claims he was hit.

Eye-witness, Ausar Moore, says Carmona started yelling at Brittany after she went outside to ask if she could help him. “I heard him yelling at her from inside the house…” he explains to officer C. Padgett who replies “yeah, well he naturally has a loud voice.” In the video footage, Brittany tells the police “I own this property, why can’t he leave my yard? When I asked him please officer leave, he starts to yell at me. You think y’all have this kind of power? You have this authority?” Officer C. Padgett responds by telling her to be quiet. Then he and Tyler Landreville #68044 enters her home and physically attacks her. In the police report, they describe Brittany’s voice as “LOUD”.

Another officer involved, M. Highsmith #79736, asked Brittany if she wanted to explain what happened, and Brittany expressed to him that her mouth was hurting from her broken teeth and that she didn’t want to talk. Highsmith responded with “ok, refusing to cooperate…” as if it was a crime for her to remain silent.

Brittany is a college graduate, an award-winning filmmaker, and a property owner with no criminal record or history. The police showed up in her driveway for no reason at all. She called 911 for help, and when the police arrived they entered her home without a warrant and violently arrested her.

People following this story via social media believe the incident was deliberate and may be tied to the fact that Brittany Chrishawn, and her husband Ausar Moore, produced an award-winning film about police brutality called Illville. Illville is a dramatic-satire that explores the psychology behind police brutality and the negative effects it has on society.

Find Brittany’s petition and other ways to support her here:
BrittanyChrishawn.com/justice