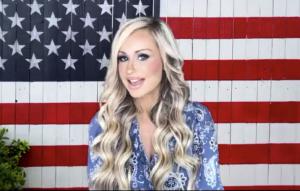 its time for California Gov Gavin Newsome, LA Mayor Eric Garcetti and La top health Official Barbara Ferrer to give up their salaries and donate to the restaurant workers they put out of business”
— TV Talk Show Host Anne Elizabeth

Elizabeth went on to say : “It’s time for these politicians to put their money where their mouth is! Friday news dump revealed that Los Angeles California dictators and our Governor want to shut businesses down, put restaurants out of operation, stripping people of their jobs! They are putting people out of work JUST WEEKS BEFORE CHRISTMAS. Think about that… these are people, they have families, they have kids with sugarplum fairies dancing in their heads and hopes of Santa Clause coming to town!”

Elizabeth also stated “They are people who need to pay rent, utilities, and mortgages! People who will now have to try to figure out how they’re going to make ends meet, let alone how they will get through the holidays! People with modest incomes living paycheck to paycheck.
These unconstitutional restrictions are crushing people.“

Elizabeth also said, “shutting down restaurants affects entire communities. A chain reaction from restaurant workers to restaurant suppliers to Uber and Lyft drivers to beverage distributors, to garbage companies, to bakers, to farmers, to everybody around. THIS doesn’t just affect people in the restaurant, it affects everyone."

Elizabeth said “Time for them to put their money where their mouth is and pony up!, I'm calling on Health Department head Barbara Ferrer, who is calling for further shutdowns, and not allowing ANY gatherings AT ALL as of this coming Monday to everyone in LA excluding protestors and religious gatherings… so on a side note, good news churches, reconvene and gather! Barbara is one who KNOWS the science, as a virologist, and she is aware that this doesn’t spread in open environments outside. While she sits back in her health department, social “Welfare” job reaping in a whopping $38,000 plus per month salary! It's unconscionable!
Also, I'm calling on Governor Gavin Newsom who makes a whopping $100,000 dollars a month… while his winery stays open, by the way.
I'm calling on Mayor Eric Garcetti, who lives in a free mansion donated by the Getti’s, making $20K per month.
If They want to take money away from people then it’s only fair to ask them to do the same!
"Garcetti, Newsom, Ferrer… will you give up your extravagant incomes during this restriction period and stand In solidarity with the very people you are putting out of work? Will you give up your income to a special fund that will directly benefit the very people you are hurting?

Will you put your wealth behind your strong-arm devastating demands? Will you do this to show that you will stand with the people?”

Elizabeth continued “There is no science behind shutting down outside dining …none! Meanwhile these … politicians, they sit in their cushy estates, on their extravagant sofas, eating their lavish meals, with luxurious gifts under their Christmas trees.”

Anne Elizabeth also said “All while they sit back by their cozy fireplaces, and their government-sponsored mansions, making their hefty incomes while stripping others of their modest ones with their unjustifiable rules. This is straight out of Scrooge! Will they think about the very people they are hurting this holiday season? Do they care? Because, They’re hurting the working class, not the wealthy! It’s a joke!”

Elizabeth explained “ The data showed the last lockdown, the highest spread was where the lockdowns remained, Los Angeles and New York. The data showed that the spread was in the homes, not in the restaurants and stores. The data showed, extending lockdowns didn’t work. The data shows us that covid has a 99.97% cure rate! Identical to the Flu, which we don’t lockdown for, and those statistics are on the CDC website itself! So why are we running? …Why?!! And why aren’t they monitoring flu this year? Did big-bad-covid have a meeting with familiar-Flu? Or are we going to assume flu IS covid this year and keep the flu in the covid numbers? And it. Is. Not. Fair”.

Elizabeth said, “Their salaries should be put in a special fund that can be divided up among restaurant workers that these so-called leaders who are elected to work for the people, meanwhile they just put out work! Let’s give their salaries to people who work at businesses that they caused to be lost or shut down, effective Monday, Nov 30th.”

“The people of California deserve better than these three official’s who act like we are all in this together, NO WE ARE NOT, these three officials do not live by their own rules and they continue to take a salary, dine with family, and keep their businesses open. It is time they see what it’s like in the real world.” Said Elizabeth.

ANNE ELIZABETH DELIVERS HER MESSAGE ON VIDEO BELOW
https://youtu.be/chjeVi1c8-c