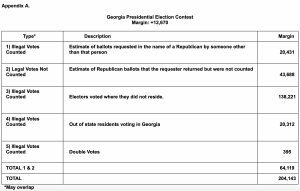 AMHERST, VIRGINIA, UNITED STATES, November 25, 2020 /EINPresswire.com/ — The Amistad Project of the Thomas More Society today filed a lawsuit contesting the results of the 2020 presidential election in Georgia, citing expert opinion that well over 100,000 illegal votes were improperly counted, while tens of thousands of legal votes were not counted.

The expert analysis of government data showing that the total number of illegal votes counted and legal votes not counted is greater than 200,000 — vastly exceeding the 12,670-vote margin in the presidential election contest.

“The number of potentially fraudulent ballots we’ve identified in Georgia is over 15 times greater than the margin separating Donald Trump and Joe Biden. This finding undercuts the integrity of the general election,” said Phill Kline, Director of The Amistad Project. “The discrepancies we identified arose in large part because certain election officials acted with greater fealty to the dictates of private funders than to the laws set forth by the people’s representatives in the General Assembly.”

Systematic failures by state and local election officials to adhere to the procedures outlined in Georgia’s election code were encouraged and facilitated by private monies donated by Facebook founder Mark Zuckerberg through a leftist organization called the Center for Tech and Civic Life (CTCL), which gave $6.3 million to Fulton County, and smaller amounts to at least a dozen other generally Democratic counties.

The CTCL grants imposed a number of strict conditions on recipients, such as specifying the number of polling places and ballot drop boxes, as well as paying for additional staff to help voters comply with absentee ballot requests and certification requirements. Counties that were unaware of the CTCL grants or unable to receive such funds could not provide voters with the same advantages.

Failure to comply with all of the conditions set forth by CTCL would have required the counties to refund the entirety of the grant monies they received, which were used for essential expenses such as paying the salaries of election workers and funding the purchase of voting equipment.

Trey Trainor, the Chief Electoral Officer of the Federal Election Commission, reacted to a similar pattern of lawlessness and irregularities detailed in the Amistad Project’s litigation filed in Pennsylvania by asserting that “the referendum has not been open” and “this election is invalid.”

The Amistad Project is asking the courts to recognize that the same conclusions apply to Georgia, arguing that the violations outlined in the litigation deprived voters of due process and equal protection, and rendered the results of the election null and void. As a result, the only practical, legal remedy is to invalidate the election result and allow the Georgia General Assembly to appoint the state’s presidential Electors.