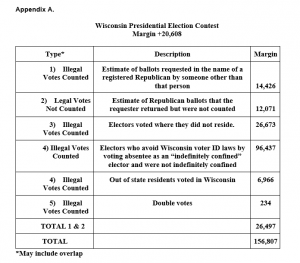 “We have identified over 150,000 potentially fraudulent ballots in Wisconsin, more than enough to call into question the validity of the state’s reported election results,” said Phill Kline, Director of The Amistad Project of the Thomas More Society. “Moreover, these discrepancies were a direct result of Wisconsin election officials’ willful violation of state law.”

The discrepancies discovered in the Amistad Project’s investigation, conducted in the last several weeks, include more than ten thousand Republican ballots that weren’t counted, more than ten thousand Republican voters who had their ballots requested and filled in by another person, and around a hundred thousand illegal ballots that were counted anyway [Appendix A]. The problematic ballots were identified in a data analysis performed by statistician Matthew Braynard and mathematician Steven Miller.

The lawsuit details a series of illegal actions taken by Wisconsin officials that led to significant numbers of improper votes being counted, as well as tens of thousands of legal votes that were not counted.

One of the most impactful violations involved election officials brazenly defying state laws designed to ensure the integrity of absentee ballots, specifically provisions requiring voters to present photo identification when requesting an absentee ballot. The only exceptions to this requirement outlined in law apply to voters who are either “hospitalized” or “indefinitely confined because of age, physical illness, or infirmity.”

Local election officials unilaterally interpreted the “indefinitely confined” exemption to apply to persons suffering from COVID-19, and the Wisconsin Election Commission exceeded its statutory authority by issuing “guidance” instructing election clerks not to reject voters who cite the exemption, even if the officials have knowledge that the individuals in question are no longer indefinitely confined.

Statistical analysis indicates that nearly 100,000 persons who exploited this exemption to cast absentee ballots were not actually indefinitely confined on Election Day, meaning they should not have been eligible to vote.

The cities and counties where these violations occurred were among the six jurisdictions with reliably left-leaning populations that together received in excess of $6 million from the Center for Tech and Civic Life (CTCL), a left-leaning organization funded by $350 million donated by Facebook founder Mark Zuckerberg. Receipt of this funding was itself a violation of state law. Jurisdictions that did not receive CTCL monies, on the other hand, generally followed state laws.

In response to a similar pattern of lawlessness and irregularities detailed in litigation filed in Pennsylvania, the Chief Electoral Officer of the Federal Election Commission, Trey Trainor, recently remarked that “the referendum has not been open” and “this election is invalid.”

Based on the sheer scale and scope of the illegality in Wisconsin, the statistical evidence makes clear that the unofficial election results reported by the state are illegitimate and inconclusive, leaving the state legislature as the only body that can lawfully appoint Wisconsin’s 10 presidential Electors.