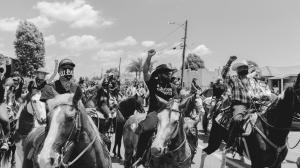 The Compton Cowboys are calling on BIPOC cowboys and cowgirls across the country to organize rides that get suppressed voters to the polls. 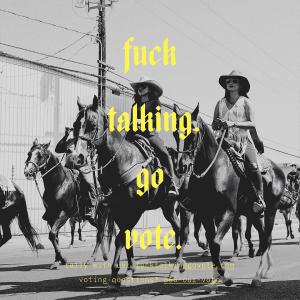 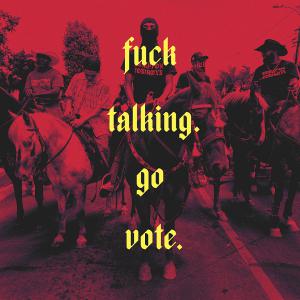 The Compton Cowboys and Chicago-based creative studio Someoddpilot collaborated to amplify the Cowboys’ message through a multi-media campaign.

Be loud. Be forceful. Be proud. Share and influence others, too. Your vote matters, because you matter.””
— Randy Savvy, Compton Cowboys’ creative director

CHICAGO, IL, UNITED STATES, October 28, 2020 /EINPresswire.com/ — The Compton Cowboys, an activist group that strives to uplift its community through horseback riding and highlighting the legacy of African-Americans in equine and western heritage, are calling on BIPOC cowboys and cowgirls across the country to organize rides that get suppressed voters to the polls, using their elevated position, on the backs of horses, to lead the charge. The group has launched a nationwide campaign “F*** Talking. Go Vote.” as a call to action for riders everywhere to stage “Ride To Vote” events in their cities. Each event will rally voters on a specific day to march with the riders to an early voting location. The campaign also serves as inspiration for voters – on horseback or not – to follow their example, flip the traditional power dynamic and make their voices heard.

Having taken a prominent role in protests in Los Angeles, the Compton Cowboys wanted to continue to make a difference for this year’s election. The Compton Cowboys’ creative director Randy Savvy, who is featured prominently in the campaign and penned its story and headline, directed Chicago-based creative studio Someoddpilot to help amplify the Cowboys' message through a campaign that would resonate with suppressed voters overwhelmed by this year’s election. The campaign imagery features footage from the Compton Cowboy’s September 20th rally in Los Angeles, captured by photographers Miguel Flores-Gayle and Brandon Barnhart. The launch video, shareable posters, and website (www.fucktalkinggovote.com/join-a-ride) that coordinates group rides across the nation will serve to educate and empower voters so they mount up and get to the polls before or on November 3rd.

The result, “F*** Talking. Go Vote, “ is a stunning and powerful message that addresses how, according to Randy Savvy, “Fights have always been a long journey. It isn’t something that happens over night.” He continues, “But there’s too much talking about voting and not enough action about it. We’re going to do something about it.”

When asked why the Cowboys embody the spirit of the campaign Savvy says, “I always felt like the Cowboy represents being a force for some type of change. A trailblazer.”

He continued with a message to young voters debating whether they should vote: “Be loud. Be forceful. Be proud. Share and influence others, too. Your vote matters, because you matter.”

“The Compton Cowboys are so inspiring. They wrote, directed, and starred in this campaign to get people to the polls. And we were beyond humbled to help in any capacity we could,” said Chris Eichenseer, creative director of Someoddpilot. “The Cowboys are working hard to bring people together to have their voices heard and to fight for what’s right. Because at this point, what more is there to say?”

For more information and to join a ride, reach out to the contact information listed at www.fucktalkinggovote.com. Rally with the Compton Cowboys and voters nationwide by sharing out their video and downloadable posters, using the hashtag #fucktalkinggovote .