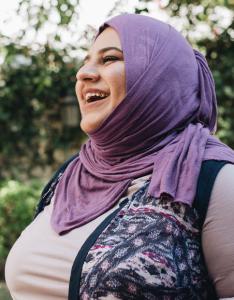 ZAIN SHAMI is a Los Angeles based actress and stand-up comedian. She's one of the first internationally known Hijabi Muslim females who performs standup comedy

We looked high and low, and suddenly there she was, the essence of what I had impossibly imagined—an Iraqi hijabi comic who loves to wear muumuus. We are fortunate to have Zain join our talented team.”
— Weam Namou

STERLING HEIGHTS, MICHIGAN, UNITED STATES, October 28, 2020 /EINPresswire.com/ — Pomegranate Pictures is thrilled to announce the attachment of Comedian Zain Shami to co-star in the 2021 production of Pomegranate. Writer-director, Weam Namou, said, “We looked high and low, and suddenly there she was, the essence of what I had impossibly imagined—an Iraqi hijabi comic who loves to wear muumuus. We are fortunate to have Zain join our talented team.”

ZAIN SHAMI is a Los Angeles based actress and stand-up comedian. She is one of the first internationally known Hijabi Muslim females who performs standup comedy within the United States. Born in Kuwait, to Iraqi parents, Zain left the Middle East at the young age of two, whereupon her parents immigrated to California. Raised in Los Angeles with a very unique perspective on religion and culture, she is able to grapple her unique and unrivaled upbringing with a lot of laughter and love! She earned her Bachelor of Arts in Literature and English Education from Cal State Long Beach. She worked at Disney Entertainment, and was a newspaper journalist for a while. As an actress she’s been on numerous television shows and films helping to bridge the gap between Muslims and non-Muslims alike by normalizing the everyday life of a Hijabi Muslim American female. Active on social media as @ZainComedy, she has over fifty-thousand followers on Instagram, and almost half-million on TikTok.

For Pomegranate, Zain takes on the role of Hassina Al Mousawi Niran’s loving but strict Muslim mother. A strong woman, Hassina thinks muumuus are the latest American fashion always wearing a matching hijab. Under her muumuus, Hassina wears the family pants. Easily irritable, she’s obsessed with food and keeps their dual-sided refrigerator and freezer stocked to overflowing. Her biggest problem is getting her food stamp card renewed so her family won’t starve. She’s also obsessed with marrying Niran off and keeps Polaroid snaps of possible suitors in her bra.

Pomegranate is a dramedy by writer-director Weam Namou, based on her childhood experiences immigrating from Iraq to the United States, and then as an adult living through the presidential election of 2016. Consequently, Pomegranate is the story about how, in the weeks before the election of Donald Trump in 2016, a young, politically liberal, Iraqi Muslim immigrant struggles to find her footing in a neighborhood of well-to-do, politically conservative, Iraqi Christians, while battling her family’s fears of deprivation and demands of loyalty to Muslim traditions.

Pomegranate Pictures, LLC is owned and managed by Weam Namou, who wrote the screenplay and will direct the movie. She is working in association with Buffalo 8 Productions (Santa Monica, CA) to produce the movie.