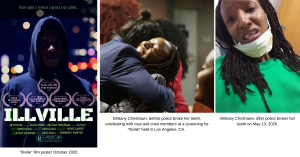 Brittany Chrishawn celebrating her award-winning film, and her teeth before and after they were broken by police.

The producer of award-winning police brutality film Illville, gets teeth broken after police enter her home without a warrant.

UNITED STATES, October 23, 2020 /EINPresswire.com/ — Award-winning African-American filmmaker, Brittany Chrishawn Williams-Moore better known as Brittany Chrishawn, receives her 5th award for a film she produced called "Illville". Her story is unique because "Illville" is a film that explores police brutality, and shortly after winning her 4th award for this film Brittany was coincidentally brutalized by police officers in the comfort of her own home.

As producer of her first film, Brittany Chrishawn Williams-Moore was grateful for the recognition her film was receiving. “I was hesitant and nervous at first, to put out a black film about police brutality. I wasn’t sure how receptive the festivals would be.”

And then in 2020, "Illville" captured the attention of two more film festivals outside of the United States. "Illville" is now scheduled to be screened as an official selection of the Paris Lift-Off Film Festival and The Cannes International Pan African Film Festival in France.

The festival in Cannes was originally scheduled for April 2020, but COVID-19 quickly postponed the event to later in the year. And a month after it was postponed, Brittany Chrishawn Williams-Moore experienced the very tragedy her film "Illville" was created to shed light on.

On May 13th 2020, a police officer parked in Brittany’s driveway for no legal reason. Brittany approached the officer’s vehicle to ask if she could help him, but she ended up having to call 911 to report the officer for refusing to give a reason for him being there and refusing to leave.

Brittany’s husband, Ausar Moore who’s also writer and director of "Illville", says “I was a little relieved when the supervising officer and other officers arrived at the scene. But instead of the supervisor making the officer leave, two other officers including one who previously killed two African-Americans in Jacksonville ran into our house without a warrant, tackled my 97 pound wife, and bangged her head against our wooden floor breaking her two front teeth in half.”

Ausar Moore was inspired to write "Illville" shortly after Mike Brown of Ferguson was killed. “When I saw Mike Brown’s body lying on the ground, I felt like I was looking at myself…I am disgusted with how this system routinely oppresses people of color.”

Brittany’s teeth were broken and her nerves were damaged. She now suffers from Complex Regional Pain Syndrom (CRPS) which is dubbed ‘the suicide disease’.

Her story has been an inspiration for many, and she currently has $68,000+ supporters on change.org.