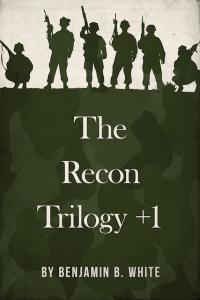 A deeply experienced, original voice. I was moved and surprised, both by the sorrow and the joy. Highly recommended.”
— Tod Davies, Editorial Director, Exterminating Angel Press

A cross between Alice in Wonderland and Apocalypse Now, Triggerfish 1-2 is a journey through the Central Highlands of consciousness smoldering with feverish realizations that question self-identity leaving Triggerfish, an idealistic lieutenant, to be visited by historical entities and transported to episodic places as he hopes and waits for a MEDEVAC.

Scarecrow Angel, a childhood friend of Specialist Fourth Class (SPEC4) Blake Williams, first appeared as one of the visiting characters in the original versions of Triggerfish 1-2, but he had to be excused from that story when he heard Blake calling for him from an early morning watch in another part of Vietnam.

The Leg examines what happens when memories are separated to either move ahead or else be left behind by subsequent experiences. Only in the process of recollecting and sharing will the memories be able to make sense out of the directions that have or haven’t been taken.

Challenging perspectives and expectations with international, generational, and personal insights, El Dorado locks and loads the guerrilla experience and links wars and revolutions over eras and continents to help Private First Class (PFC) Lonnie Trujillo get back to base camp, and hopefully make it home.

"Benjamin White's Recon Trilogy +1 is a gut-dark and grinning fantasia of battle trauma, unpredictable and vigorously headlong. How vast the war within and innumerable the dead . . . and how noble White's mission of rescue." –Donald Morrill, author of Beaut and Awaiting Your Impossibilities

"In a quartet of poems that move from home to war, with stop-overs in Ancient Greece and Mexico, among other locales, Benjamin B. White has found the source of our stories, as he writes, 'The decisions we make, make us.' Whether dying for evac, or missing a leg (and the leg missing the man, in turn), or seeing El Dorado where it isn't, the protagonists of these poems endure their futility bravely; for bravery may indeed be hope despite the loss of hope. Sad, searing, and soulful, these tingling poems document the wartime battles of men victimized by war, soldiers all." – Alan Michael Parker
"A deeply experienced, original voice. I was moved and surprised, both by the sorrow and the joy. Highly recommended." – Tod Davies, Editorial Director, Exterminating Angel Press (https://exterminatingangel.com/)

For additional information on Benjamin White or Recon Trilogy Plus One please reach out to Lisa Diane Kastner at runningwildeditor@gmail.com or at 610-235-9626. For more information on Running Wild Press, go to www.runningwildpress.com To check out the full catalog, go to https://bookshop.org/shop/runningwildpress