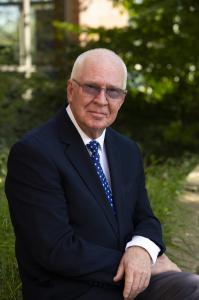 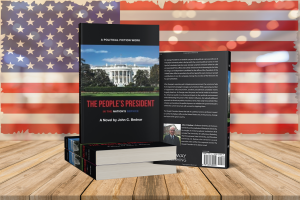 John C. Bednar's novel portrays election run of the only man in US politics aiming to be 'The People's President'

All my life I have thought there is too much money in politics.”
— John C. Bednar

SOUTH CAROLINA, UNITED STATES, October 16, 2020 /EINPresswire.com/ — As both dominant parties in the US enter crisis mode, someone steps up to show the nation and its people a better alternative. It galvanizes the public and the candidate embarks on his campaign, but it is not without perils. Of course, there are some whose best interests are in stopping "The People's President" from being chosen. This is the premise of John C. Bednar's political thriller novel, at once both an optimistic depiction of hopeful possibilities and a scathing indictment of what he sees as deficiencies in the current status quo.

It is election season and Princeton professor of political science George Franklin enters the fray and surprisingly "won't accept a dime" of donor dough, which results in a wave of public support. The public is jaded but Franklin's promise of doing things differently starts snowballing into a realistic shot as it excites key demographics in the country. But of course there are interest groups who would not have it this way and the Franklin campaign is poised to hit some road blocks.

With this, Bednar paints an idealistic picture of how the country's democracy should work – by taking fundraising completely out of the picture.

"All my life I have thought there is too much money in politics," he opines. "Starting in college, I asked people: 'Do you now or have you ever encouraged your children to be politicians?' I have only had two positive responses. They were both from families of politicians!"

With "The People's President" Bednar aims to show readers that idealism is not and should never be dead or disregarded. He shows that there are honest leaders all over the country who have the potential to serve America's democratic republic with integrity. They need encouragement and support because, of course, the deck will be stacked against them. But all this means is that people should shoulder more individual responsibility as citizens and work for the betterment of society, each doing their part, rather than relinquishing these duties to candidates who cannot serve with integrity without public support and mobilization.

Without these things, without popular momentum and public participation, the only recourse for candidates will be fundraising, which is the very mechanism Bednar condemns in his work. He shows that fundraising leads to candidates becoming beholden not to the people but to the monied interests, who then have an outsized share in democracy, becoming the ones who decide the nation’s course rather than the public.

So Bednar believes that for democracy to be healthy, the public must cast aside the rule of money and shoulder a far greater amount of personal responsibility. Political candidates, whether for the presidency or for a local election, must be beholden to the common citizen … they are the ones the leaders must serve and represent.

About the Author
John C. Bednar is a '65 graduate of Princeton University. There he majored in English but fell in love with French. One year at the Sorbonne and three years at the University of Besancon gave him a university doctorate specializing in Medieval French literature. He taught at Princeton for two years and at Berkeley for three years. After that, he was in the business world for many years. Now he is running for Congress, vying for Lindsey Graham's old seat in the U.S. House of Representatives while having a budget of zero. Just like the protagonist of his novel.