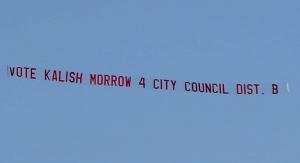 Kalish Morrow in the skies above Hanford!

The Morrow Campaign Canvases Neighborhoods with her “Community-Involved” Message While a Plane Flies Overhead!

HANFORD, CALIFORNIA, USA, October 16, 2020 /EINPresswire.com/ — As the Hanford, California City Council District B race closes in on election day – November 3rd – candidate Kalish Morrow and her team walked several Hanford neighborhoods with a convoy of supporters. Last Sunday’s campaign effort was topped off by a plane with an aerial advertisement fluttering behind it. “I’m so excited to hear, first hand, the positive feedback from many citizens as we combed the streets of Hanford today”, exclaimed Morrow.

Check out photos and more of the aerial advertisement on the official Kalish Morrow Facebook page here: https://www.facebook.com/kalishmorrowhanford/

It started on Saturday with yet another park clean-up of Earl F. Johnson Park in Hanford. Her “different kind of a campaign” approach to this year’s City Council race has set her apart from her opponents. “I believe political candidates need to tone down the rhetoric and mud-slinging, but instead, roll up their sleeves and get to work with their constituency as we do.” In early September, Morrow organized and led a Civic Center Park clean-up staffed by volunteers.
Check out photos and more of the aerial advertisement on the official Kalish Morrow Facebook page here: https://www.facebook.com/kalishmorrowhanford/
Morrow’s activities with Habitat for Humanity, Heart of Hanford charity and park cleanups is demonstrative of her commitment to bettering Hanford for every citizen. Kalish adds, “I want to make it clear that a big part of my platform for City Council is protecting our parks, preserving our downtown, stimulating businesses and the local economy, and these efforts always start with hands-on, hard work in our neighborhoods.”

More about Kalish Morrow’s campaign for Hanford, California City Council District B can be found at www.morrow4hanford.us or on Facebook at https://www.facebook.com/kalishmorrowhanford/.