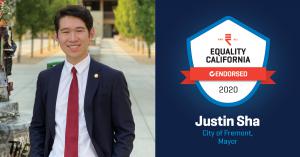 Justin Sha receives the endorsement of Equality California for his 2020 Fremont mayoral campaign. 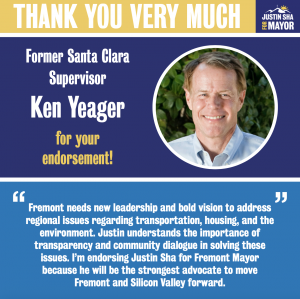 FREMONT, CA, USA, September 19, 2020 /EINPresswire.com/ — Today, Equality California announced its endorsement of four candidates running for local office in the Golden State, including Justin Sha for Mayor of the City of Fremont. Equality California is the nation’s largest statewide LGBTQ+ civil rights organization, with over 900,000 members.

“We are excited to support Justin Sha for Fremont Mayor. He is the pro-equality candidate in this race, who cares greatly about diversity, inclusion, and representation of all Fremont residents. As an openly LGBTQ+ candidate, Justin Sha understands what it feels like to not have a voice, and we know he will champion LGBTQ+ civil rights and social justice,” said Rick Chavez Zbur, Executive Director of Equality California.

Justin Sha has received the endorsement of former Santa Clara Supervisor Ken Yeager, who served on the Santa Clara Board of Supervisors until terming out in 2018. Ken Yeager provided a statement today.

“Fremont needs new leadership and bold vision to address regional issues regarding transportation, housing, and the environment. Justin understands the importance of transparency and community dialogue in solving these issues. I’m endorsing Justin Sha for Fremont Mayor because he will be the strongest advocate to move Fremont and Silicon Valley forward.”

Earlier this week, Justin Sha received the endorsement of the California Young Democrats.

Justin Sha is running for Mayor of Fremont, CA. Sha is VP of Customer Success at Droisys, a global technology company headquartered in Fremont, and he teaches business law at Ohlone College. Sha is an involved community member, serving on local nonprofit boards. He is the Chairman of Asian American Millennials for American Advancement as well as a member of the Ohlone College Foundation Board. Sha received his B.A. from Dartmouth College and his J.D. from UC Hastings College of the Law.