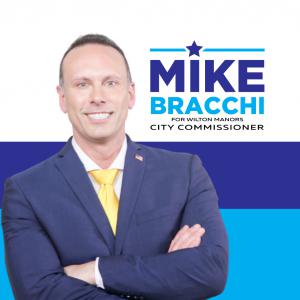 Bracchi continues to earn support from officials and organizations throughout Broward County.

“It is critical we continue to promote diversity in our city government. Elected officials should reflect the communities they represent.” ”
— Mike Bracchi, Candidate for Wilton Manors City Commission

The Hispanic Vote PAC is a 527-non-partisan political action committee focused on informing and engaging the Hispanic community on voting and the local political process. Bracchi, whose grandfather was Spanish, stated “This endorsement means so much to me. My grandfather would be proud. It is critical we bring voices from all backgrounds and ethnicities to the table in order to build a stronger community.” Wilton Manors’ population is approximately 12% Hispanic and most of the city’s elections are decided by a margin of less than 5%; ergo, the Hispanic vote is a significant voting segment of the population.

“Over 30% of Wilton Manors’ population is made up of minority communities. Our Latino residents, as well as other minority groups, are not adequately represented in local government at a commission level, nor a board and committee level” stated Bracchi. He went on to say, “It is critical we continue to promote diversity in our city government. Elected officials should reflect the communities they represent.” When elected, Bracchi intends to start an outreach program to engage and educate individuals from minority communities on how to become more involved in their local government.

Bracchi is a licensed pharmacist, attorney, and hospital executive who now runs his own healthcare consulting company. His work experience includes managing a budget of over $350M for a major company in the healthcare industry which provided an invaluable skillset for budgeting and operational excellence for large budget and complex operational environments, similar to that of a city.