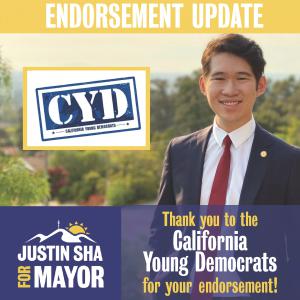 Justin Sha receives the endorsement of the California Young Democrats for his 2020 Fremont Mayoral campaign.

Quite frankly, I think voters are tired of seeing career politicians break their campaign promises and then put their own political ambitions over the needs of the community.”
— Justin Sha

FREMONT, CA, UNITED STATES, September 14, 2020 /EINPresswire.com/ — In the race for mayor in Fremont, Justin Sha is the candidate who has been endorsed by local and state Democratic Party organizations. While Justin Sha and Mayor Lily Mei are both registered Democrats, Justin Sha has earned the endorsements of the Tri-Cities Democratic Forum, the South Alameda County Young Democrats, the East Bay Stonewall Democratic Club, as well as now the statewide organization the California Young Democrats.

Whereas it is typical for almost all Democratic incumbents to be endorsed for their re-election races, Mayor Lily Mei will not be receiving the endorsement of the Alameda County Democratic Party, in stark contrast to Fremont City Councilmembers Teresa Keng and Raj Salwan who have been endorsed. Lily Mei only just became a Democrat last year.

“It is widely known that the Mayor became a Democrat for political purposes,” said Justin Sha, candidate for Fremont Mayor. “The Mayor touted her status as a No Party Preference (NPP) voter for years, even crossing over to vote for a Republican during the 2004 primaries—and this is all public record. Prior to August 2020, she was trading endorsements with other elected officials running for re-election as well as telling countless wealthy donors, other councilmembers, and state legislators about her desire and intention to run for State Senate in 2022.”

Justin Sha explained, “Changing party affiliation would matter for up-ballot partisan races like State Senate or U.S. Congress because voters can see your political party affiliation for these races, unlike down-ballot races that are nonpartisan like Fremont City Council and School Board.” California is widely regarded as a Democratic Party state.

Justin Sha continued, “Quite frankly, I think voters are tired of seeing career politicians break their campaign promises and then put their own political ambitions over the needs of the community. It really is not about being Democrat, NPP, or Republican. I mean, many of my own supporters are NPP and Republican. Rather, it has to do with being consistent, being humble, and having integrity about what you campaign on.”

Over the past several years, Mayor Lily Mei has faced controversy for flip flopping, telling different groups different things, and trying to play both sides. In 2016, Lily Mei defeated then incumbent Mayor Bill Harrison by campaigning against “rampant development.” Despite this, 4000 units have been built during Lily Mei’s tenure as mayor.

In the mayoral race, Lily Mei has also switched her position on key issues several times, such as on Prop 15 and Prop 22. While the incumbent Fremont Mayor told Fremont Chamber of Commerce membership that she was against Prop 15, she later provided that she was in favor of Prop 15 during the recent mayoral forum held on Thursday, September 10, 2020. This forum was organized by the League of Women Voters of Fremont, Newark, and Union City.

For more on the League of Women Voters mayoral forum for the City of Fremont, visit: https://www.einpresswire.com/article/526014915/justin-sha-fremont-mayor-candidate-discusses-housing-the-environment-and-tesla-during-historic-fremont-mayoral-forum.

Justin Sha is running for Mayor of Fremont, CA. Sha is VP of Customer Success at Droisys, a global technology company headquartered in Fremont, and he teaches business law at Ohlone College. Sha is an involved community member, serving on local nonprofit boards. He is the Chairman of Asian American Millennials for American Advancement as well as a member of the Ohlone College Foundation Board. Sha received his B.A. from Dartmouth College and his J.D. from UC Hastings College of the Law.