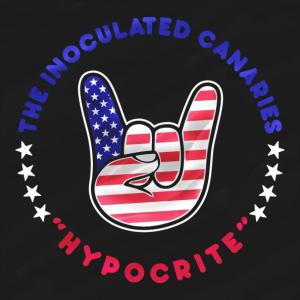 NEW YORK, NY, UNITED STATES, September 11, 2020 /EINPresswire.com/ — New York City-based band The Inoculated Canaries have released their new single “Hypocrite” (accompanied by a music video.) “Hypocrite” was produced by Matt Squire (producer of Panic! at the Disco, The Used, Taking Back Sunday, Demi Lovato and more) and was mastered by Howie Weinberg (15X Grammy Award-Winning mastering engineer with 32 Grammy nominations and over 200 Gold and Platinum records.) The politically charged song stays clear of pointing a finger at any specific figure, but the lyrics describe the “lying eyes” of politicians who are unambiguously responsive to what is going on in the world right now. With the upcoming election very much on the band’s mind, they decided to time the release of the track to the fall campaign season.

The band’s lead singer and primary writer Michael Rubin explains why “Hypocrite” took on such urgency for the Canaries. “Now more than ever,” he says, “everything is political. Deciding where you would like to spend your money is political and every choice you make has political ramifications.” The song, Rubin explains, was started around a year ago, but rose to become a priority only over the past couple of months, with the dual challenges of the pandemic and the movement for racial justice.

While their new track has echoes of the kind of instant-newsworthiness of the protest music of the ‘60s and ‘70s, the Inoculated Canaries have, up until now, been inspired more by the music of that era than by its social relevancy. Rubin grew up in a home where his father was a huge fan of classic rock. “He still is,” Rubin says. ‘You know, ‘Zeppelin is God.’ The first song I heard after coming out of the womb was ‘Achilles’ Last Stand,’ all eleven minutes of it.”

By the time Rubin was twelve years old, he already was putting together the band that became the Inoculated Canaries (it was, he explains, around the time of the bird flu.) They recorded their first EP The Blue Laws in 2013, when he was thirteen, with the band originally being influenced by the adventurous music of Pink Floyd and Frank Zappa, with elements of prog-rock. “As a thirteen year old I listened to a lot of weird music, so the band kind of reflected that. Then as I got older, I got kind of more focused on my songwriting, and it was music that was palatable. I was a School of Rock student for six or seven years, so I grew up playing the same stuff my dad used to listen to. Then I think the real shift in the Canaries happened when I went from listening to Zappa and Steely Dan and started listening to more modern stuff, like Foo Fighters and Tame Impala.”

Over the course of the last seven years, the Inoculated Canaries put out a number of singles (including “Don’t Be Late,” “Sneakers,” “Count Me Out,” “Who Are You” and the most recent, “Donna,” as well as their EP Trying Times. The band has also opened for The Mowglis, COIN, and played ‘Cult of Personality’ live with Will Calhoun and Doug Wimbish of Living Colour. Recently, Rubin formed a second band, who released their single “Shake! Shake! Shake!” under the name King Falcon in early summer 2020. “We thought about it and if you took characters from one TV show and made a spin-off show, that’s a bit like what King Falcon is. We wanted to start fresh. It’s a bit more commercial, more modern.”

But at the same time, with everything in flux (and not being able to play live in any incarnation,) there was the “Hypocrite” track that was recorded over a year ago. “We pocketed it specifically because of how politically charged it is,” Rubin says. “This is the most favorite song that we’ve written to this point and we don’t want to just put it out and not have it mean anything. So, we’ve really been saving it for this election. It’s nothing new that politicians are crooked, but just to put out a song about people that are causing misery right now and being able to put it out at such a pivotal point…just makes it that much more poignant.”

“Hypocrite” is now available on all digital outlets.