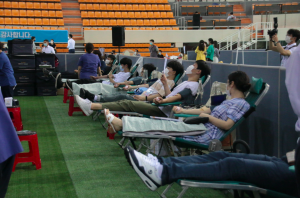 Recently, critically-ill patients are rapidly increasing due to the re-proliferation of the coronavirus. Treatment is urgently needed more than ever before.

Recently, critically ill patients are rapidly increasing due to the re-proliferation of the coronavirus. There have been over 300 confirmed patients. Therefore, treatment is urgently needed more than ever before.

The South Korea’s Central Disaster and Safety Countermeasures Headquarters (CDSCH) thanked Shincheonji for the collective blood plasma donation. Kwon Joon-wook, deputy director of CDSCH expressed his gratitude at two press briefings this week. "[The] group plasma donation for the development of treatments were made by the members of Shincheonji who were infected between February and March." He explained if a patient had completely recovered by April and May, then August and September is the optimal time for them to donate plasma. This is because coronary antibodies produced in plasma decrease after four months of full recovery.
Recovering plasma of fully cured patients is drawing attention because there is a hypothesis that a "neutral antibody" in the plasma can potentially suppress the growth of the virus. In addition, if large amounts of immunoglobulin is extracted from the plasma of fully recovered patients, developing a cure is more feasible. The blood treatment, which is being developed by Green Cross in Korea, has already been approved by the Ministry of Food and Drug Safety for Phase 2 clinical trials.

Securing large amounts of COVID-19 plasma from fully recovered patients is not easy, even in foreign countries, where there were far more confirmed cases than in Korea. Many patients have suffered for long and are tired of elongated treatment, and therefore are reluctant to donate their plasma.

Currently, Shincheonji, which suffered a massive collective infection in February and March, has become the leader in Korea’s blood plasma donations.