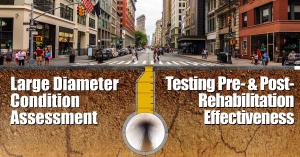 California-based Electro Scan Inc. revolutionizes the way large diameter pipes are tested for leaks and to confirm the watertightness of trenchless pipe materials for the water and sewer industry. 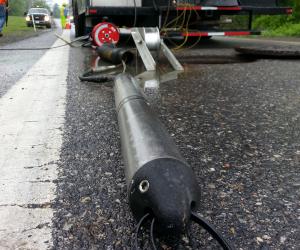 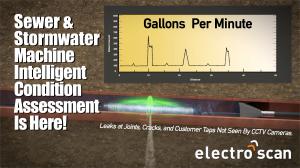 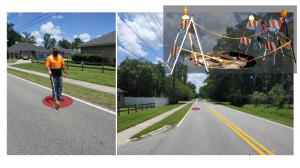 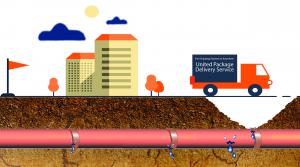 Surcharged pipes often seep effluent through defective joints outside of the pipe. Liquified soli then re-enters the pipe through joints causing silt to accumulate at the bottom of the pipe and a creating a void above the pipe’s crown.

Electro Scan has revolutionized how leaks can be detected in large diameter pipes and how newly rehabilitated pipes can be certified as watertight.”
— Chuck Hansen, Chairman & CEO, Electro Scan Inc.

The company's new ES-660 X-Probe, capable of assessing rehabilitated & existing pipe diameters up to 72 inches (1800 millimeters) in diameter, was used to precisely locate defects within 1/2 of an inch and estimate infiltration potential from each defect stated in Gallons per Minute.

Electro Scan was contracted to investigate the large diameter pipe in an area prone to frequent ground subsidence in a roadway. Previous inspection work conducted by a national inspection contractor used closed-circuit television (CCTV) and sonar techniques, both of which were unsuccessful in making a determination regarding the possible connection between the sewer trunk line and the surface subsidence.

The Company's FELL technology was sought by the Owner to evaluate pipe conditions for the entire 360 degrees of the inside pipe wall, not just what could be observed above the water line. In fact, working closely with the Owner's operations team, the master pump station was temporarily shut down to allow the pipe to fully surcharge to allow FELL inspection for the entire pipe.

Results of the survey showed notable defects in the CIPP liner, including two areas where the liner was failing.

"Electro Scan is delighted to share the results of this project as it revolutionizes how leaks can be detected in large diameter pipes," stated Chuck Hansen, Chairman, Electro Scan Inc. and former Chair ASTM Subcommittee F36.20 on Inspection and Renewal of Water and Wastewater Infrastructure.

"More importantly, the industry now has a reliable, safe, and low-cost way to test and certify that newly rehabilitated pipes are watertight – from small diameter laterals to large diameter trunk lines," stated Hansen.

Preferred by suppliers and contractors, CCTV is not only unable to dependably locate or quantify leaks, but oftentimes pipes must be emptied through expensive bypass pumping or by temporarily restricting flow to allow robotic cameras to enter a pipe or to allow challenging confined-space manned entry.

Other inspection approaches using instrumentation mounted on flotation devices have included sonar, lasers, electromagnetic, and acoustic sensors – all of which are unable to provide accurate or reliable leak locations or measurements of leak severity.

By contrast, the Company's breakthrough technology uses electric current emitted from a tethered probe that measures any pipe wall defect, including cracks, bad joints, poorly connected pipes, or degraded liners. If the electrical current escapes the pipe through a defect, it will reach a grounding system, allowing the intensity and duration of this current to be measured. If a pipe leaks electricity, it leaks water, and the measured current is converted into a flow rate in GPM or Liters per Second (LPS), both of which are common measurements used to manage water and sewer networks.

Utility customers had been requesting Electro Scan technology to assess large diameter pipes for some time.

In 2013, the Company used its standard probe system to inspect a 1,740 feet (530 meters) of a 66-inch diameter sewer interceptor that had been relined with a spiral-wrap rib-loc liner. Since the pipe was only running at approximately ⅓ of full flow, Electro Scan's existing probe was able to precisely detect leak locations below the water line that nearly a dozen previous CCTV inspections had failed to properly inspect.

Representing over 1 million gallons per day leakage into an underground aquifer, minor repairs were then made at the precise locations identified by Electro Scan. Eliminating the leak was subsequently confirmed by flow meters.

Development of the Company's ES-660 X-Probe began in 2015. Since then, the company offered its solution selectively by completing a number of large diameter condition assessments ranging from 30-inch (750 millimeters) to 66-inch (1650 millimeters) diameter pipes, using its new technology.

"Since over 80% of the CIPP we have inspected with FELL technology has estimated leakage rates of 20 GPM or more, visual inspection clearly does not provide the long-term assurance of watertightness or asset sustainability desired by smart cities," stated Condran.