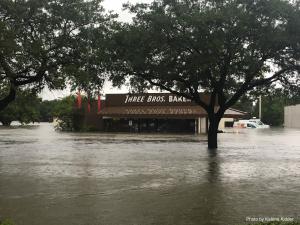 This small Houston bakery has survived 4 floods, a fire, hurricane and pandemic and knows what is needed to survive.

The LIFT UP Act proves that even the voice of a small bakery owner can be heard and make a difference in Washington, DC.”
— Janice Jucker

HOUSTON, TX, UNITED STATES, August 7, 2020 /EINPresswire.com/ — Janice and Bobby Jucker, co-owners of Three Brothers Bakery in Houston, TX, take pride having their small family bakery survive 4 floods, a fire, hurricane and now a pandemic while always paying their team. Many say they have defied the odds. The self-crowned King and Queen of Disasters know the formula for small businesses to come back. Number one on their list is access to money. Congress made great progress with the CARES Act but more is needed.

The Jucker's Legislative priorities for the next round are listed below.

-PPP – 2nd round for businesses with revenue losses of 20% or more.

-Write off on taxes expenses paid with PPP monies –It will be incredibly difficult for small businesses to come up with that cash when it’s time to file taxes if not allowed to write off those expenses.

-Open back up EIDL loans to $2 million

-Include funding to Chambers of Commerce in future legislation – small businesses rely on these Chambers and the opportunities they provide.

-This next bill is of particular importance to the Juckers because Janice Jucker was the one who recognized this group of loan holders were overlooked in the CARES Act.

Include the LIFT UP Act – Introduced in the Senate by Senator Ted Cruz (R) and in the House by Congresswoman Lizzie Fletcher (D) and co-sponsored by Congressman Pete Olson (R).

Summary: 6 months debt forgiveness for small businesses with SBA Disaster Loans (7b) taken between 1/1/15-12/31/19 as was conveyed to those with SBA 504 and 7a loans in the CARES Act – See 2 minute video – https://youtu.be/fViCglv0Udg

“The LIFT UP Act proves that even the voice of a small bakery owner can be heard and make a difference in Washington, DC. I’m really proud of our Texas lawmakers Senator Ted Cruz Cruz and Congresswoman Lizzie Fletcher because they demonstrate with the LIFT UP Act how Congress is supposed to function – bipartisan support to help the people of their districts. The passage of this bill or inclusion in the next round will help many, many businesses across the country who are already struggling from previous disasters,” explained Janice Jucker.

Both NFIB and the National Restaurant Association have been instrumental in passing legislation to help small businesses according to Jucker. She explains this help working with lawmakers is why businesses should join their trade and small business associations.

“Small business is the economic engine of America, employing half of the people in America. The small businesses that do survive will need to be solid enough to absorb the workforce who may have lost their jobs, so Congress needs to work together, as was the case with the LIFT UP Act, and make sure Main Street survives.” said Jucker.

The traditions of Three Brothers Bakery began in Chrzanow, Poland circa 1825, and were preserved despite the family’s concentration camp imprisonment during the Holocaust. Their miraculous liberation and subsequent move to Houston, brought Eastern European scratch baking traditions to 4036 S. Braeswood Blvd, 12393 Kingsride Lane, and 4606 Washington Ave where the owners are now proud to call themselves “memory makers who happen to be bakers®.” Perfecting the process for almost 200 years, each day the fifth generation scratch bakers produce a full line of breads, pastries, cookies, specialty dessert cakes and pies, as well as custom birthday, special occasion, wedding and groom’s cakes.

The Three Brothers Bakery pecan pie was named “the Best Mail Order Pecan Pie America has to offer” by Country Living magazine multiple times; bakery owner, Bobby Jucker, competed in the popular ‘Food Network Challenge’ and has been seen on other national food shows. Three Brothers Bakery was named one of “America’s 20 Best Bakeries” by The Daily Meal in 2016 and in 2017 blue ribbon champion at the American Pie Council’s National Pie Championship for their key lime pie in that category, and in 2018, the bakery’s Pumpecapple Pie Cake was featured on BuzzFeed’s ‘Worth It’ web series. In 2019, the bakery won the SBA’s Family-Owned Small Business of the Year by the Houston division.