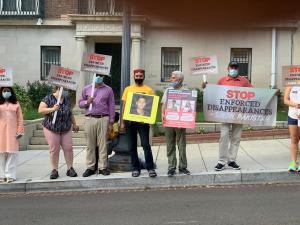 JOIN THE PROTEST AGAINST ENFORCED DISAPPEARANCES OF SINDHIS IN PAKISTAN

WASHINGTON, DC, USA, August 5, 2020 /EINPresswire.com/ — Sindhi Foundation is organizing a protest outside Pakistani ambassador's house in Washington D.C. on August 14th which is also Pakistan's independence day. Sindhi Foundations has appealed to Sindhi, Baloch, Pashtun, Siraiki, people of Gilgit-Baltistan and all other human rights organizations to join them on August 14, 2020 at 5pm EST for the freedom of victims of enforced disappearances. Enforced disappearances of Sindhis isn’t an issue of a single party, an organization, a group or any particular person but an issue of the entire Sindhi community. In today's time it's important to prove that Sindhis can struggle together and are united.

Sindhi Foundation and Sindhi Community of the United States wants to inform the media about recent escalation in abductions and enforced disappearances of Sindhis by Pakistani Authorities.

Sindhi Foundation started the “where is” campaign in 2017 when Punhal Sario (Convener Voice of Missing Persons Sindh) was abducted. This initiative by Sindhi Foundation has become a movement now and people from all walks of life including US representatives have joined the movement. Thousands of people are sharing “where is” videos with names of victims of enforced disappearance on social media.

During a protest against Enforced disappearance held on Saturday August 1, outside Pakistani ambassador's House in Washington D.C. Munawar Laghari , Executive Director of Sindhi Foundation said, “I want to tell the people in Sindh who are being tortured, suffering and fighting for their basic human rights, that ‘you’re not alone, I am with you.’ I also want to tell the families of the victims of enforced disappearances, that we are not weak, we are very strong and if we all stand united for Sindh, we will get all our people freed”.

The enforced disappearances of hundreds of Sindhis during past few years has been a cause of grave concern for every member of Sindhi community. Talking to the media recently, some of the victims' families described how they were brutally beaten minutes before their respective members were taken away forcibly. Neither women nor animals were spared from the brutal bashings of the so-called police. Posing as medics coming for a Covid19 check up to pushing their way inside the homes of the innocent to almost driving over them, these families have seen it all, some even receiving serious injuries but no justice as they don’t even know if an FIR (first information report) is lodged or not. Double Cabin Vehicles with police mafias and guns threatening to fire if an abduction was resisted has now become a familiar scenario. With the police itself involved in such cases, the poor have nowhere to hide nor a door to knock and seek justice. Where do they go? What do they do? How do they bring their loved ones back? These are some of the hard hitting questions that are asked and the answers to them are yet to be found.

Sindhis from all walks of life specially women are gathering in various cities of Sindh to protest against enforced disappearances. Most of these protests are led by women for the safe return of their loved ones. Families of the victims are being harassed by Police. Police came to arrest Aaqib Chandio’s sister Shazia today but she wasn’t home as she was organizing a protest at the press club. She has now refused to go home and will continue the protest and if police have to come and arrest her they can do so. Inaam Abbasi who has also been a victim of enforced disappearance has also lead the protests and has been on hunger strikes.